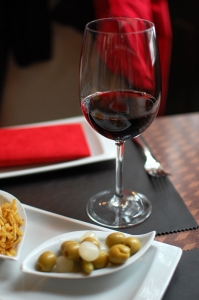 There is a long list of wine’s health benefits and yesterday a study came out showing that wine may add protection against potential respiratory pathogens. The new study from researchers at the University of Madrid suggests that wine possesses the ability to inhibit the growth of respiratory bacteria including those associated with pneumonia, acute sinusitis and strep throat.

The anti-bacterial properties of wine have been known for centuries. The ancient Greeks washed wounds with wine, which acted as a disinfect. But the connection of wine to oral health is less well documented. The most recent and similar is a 2007 study conducted at the University of Pavia in Italy which showed that red and white wine were effective in controlling the growth of several strains of streptococci bacteria that are involved in tooth decay, and some cases of sore throat.

The new study from University of Madrid took the analysis a bit further and looked at the effect of seven compounds and six extracts found in wine and grapes on the growth of bacteria associated with a range of respiratory diseases. The study concludes that the compounds and extracts found in grapes and wine possess the ability to inhibit the growth of respiratory bacteria and that the findings warrant “further investigations to explore the use of grape and wine preparations in oral hygiene.”