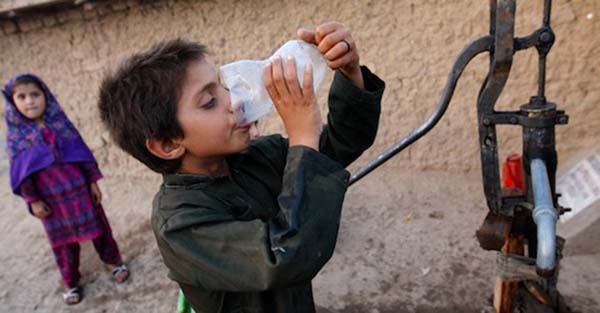 We talk a lot about corporations and their control of our food supply, but the trouble with Nestlé doesn’t have that much to do with food.

There are really two areas where Nestlé puts profits ahead of human rights, and both have had devastating effects in developing countries:

Nestlé Bottled Water (and a petition)

There are myriad reasons to avoid bottled water. It’s expensive. It’s wasteful. The plastic from the bottle leaches into your beverage. Let’s add another reason to the list though: bottled water jeopardizes water rights.

Water is a human right, but for Nestlé it’s just another commodity. Their recent bad behavior in Pakistan is a telling example of how they view water. Here’s an excerpt from the Sum of Us petition aimed at stopping Nestlé from usurping the water from villages in Pakistan:

Nestlé is draining developing countries’ groundwater to make its Pure Life bottled water, destroying countries’ natural resources before forcing its people to buy their own water back.

Now Nestlé is moving into Pakistan and sucking up the local water supply, rendering entire areas uninhabitable in order to sell mineral-enriched water to the upper class as a status symbol, while the poor watch wells run dry and their children fall ill.

Want to tell Nestlé that you think their policies suck? Sign the Sum of Us petition!

Nestlé is a big offender in this area, but they’re certainly not alone. Pretty much any time you buy bottled water, you’re supporting a company that’s privatizing water somewhere. Check out corporate giant Coca Cola’s recent “Cap the Tap” campaign to see how far these bottled water producers will go to make money.

In both the developed and the developing world, Nestlé has pushed a decades-long pro-formula campaign so that it could increase sales of its infant formula. It’s greedy, it’s ugly, and they should be ashamed of themselves.

Before we get into this, I do want to throw out a little caveat here. I completely 1000 percent understand that not every woman is able to breast feed. Despite a herculean effort, I was not physically able to breast feed my son, and I am in no way judging women who have to formula feed.

What I am criticizing are Nestlé’s attempts to make women feel that breast feeding doesn’t provide their babies with adequate nutrition. Basically, their campaign touted infant formula as the modern way to to nourish your baby. They appealed to women who wanted to keep up with the times – Better Living Through Science! – playing on women’s insecurities when they’re at their most vulnerable.

You can see this tactic at work today, right? Any woman who gives birth in a hospital gets a gift bag from a formula company. By contracting with hospitals in this way, formula-makers like Nestlé suggest to women that they have their doctor’s recommendation. It’s brilliant marketing, and it’s incredibly sleazy.

Here’s an excerpt from the Business Insider piece on Nestlé’s underhanded infant formula strategies. I encourage you to read the whole article, if you want a deeper look at this issue. This excerpt gets at their strategy in the developing world specifically:

Nevermind that these women lived in squalor and struggling to survive.

In poverty-stricken cities in Asia, Africa and Latin America, “babies are dying because their mothers bottle feed them with Western-style infant milk,” alleged War on Want.
Nestlé accomplished this in three ways, said New Internationalist:

You can read more about Nestlé and infant formula at Business Insider.

Image via Sum of Us