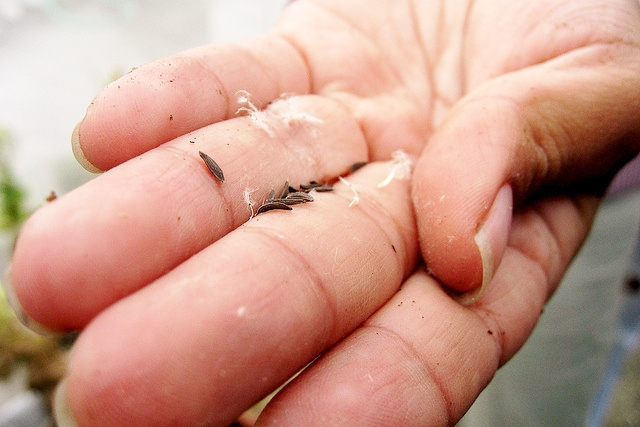 “Seed is the source of life… Seed is the first link in the food chain, and therefore when you control seed you control food.” Dr. Vandana Shiva speaks eloquently about the problems inherent in biotechnology-based corporate agriculture, and passionately argues for a food system overhaul driven by consumer action. Share this preview with everyone you know who eats food! Then catch the full interview this weekend on Moyers & Company.

The biotechnology industry is fighting hard right now against fair labeling of GMO foods in the US. California’s ballot initiative this November could be the first serious legal challenge to GMO dominionism in American agriculture, since their quiet takeover of our food system in the 1990’s.

The potential impact of such legislation cannot be understated — in terms of health, sustainability, biodiversity, farmers’ rights, social justice, and environmental impact, the stakes in the coming GMO labeling battle loom large. Monsanto and their corporate ilk have deep and well-stuffed pockets, with public relations budgets that probably surpass the GNP of some small countries.

The ‘media specialists’ on Monsanto’s or DuPont’s payroll aren’t out there sharing multi-million-dollar information about all the problems caused by GMO agriculture!

Interviews like this present a valuable opportunity to increase public awareness, without spending a bazillion dollars on our own communications experts, public relations companies, or media specialists — without even setting up fake ‘grass roots’ organizations to support whatever corporation paid us off!

We can simply speak the truth as we see it — and share, when someone speaks it as beautifully as Dr. Shiva.

Beyond spreading awareness of Dr. Shiva’s upcoming appearance on Moyers & Company, here’s what else you can do:

Whether we’re talking about GMO labeling or pink slime or agricultural antibiotics, mainstream media coverage (and therefore consumer awareness) seems to be growing by leaps and bounds.