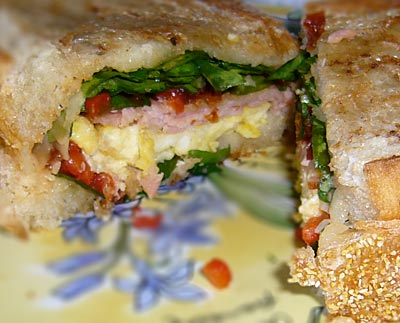 My day never begins with a leisurely breakfast in bed. Likely because my spouse is not a morning person, and the only other morning person around is under four, and she wakes me up daily before seven. However, the Kiddo makes some tasty scrambled eggs as long as I do the stove part and raw egg part. And, I have my hopes up for the years to come.

In the meantime, I will share a few favorite breakfast dishes that you moms could, say, print out, circle in great big red ink, and leave out on the counter just before hanging the “Do Not Disturb Until 9:30, or My Breakfast is Ready” sign on the bedroom door. I will live vicariously through you.

Top toast with the Bananas Foster, a sprinkle of coconut and powdered sugar. Something like a Blueberry Compote would also make a fine topping.

Preheat the oven to 350 degrees.

Spray four ramekins with cooking spray. Line each with a slice of ham, pushing it into the cup to make a pocket. Crack and egg into each ramekin on top of the ham.

To get the tops brown and bubbly, broil for just a minute at the end. You can also add spinach to this dish, which is a great variation. Just clean a bunch of spinach and heat in a skillet while it is damp just until it begins to wilt. Divide the cooked spinach among the ramekins, placing it in second after the ham and before you crack the egg in.

Prepare all the ingredients and scramble the eggs. Add 1/2 tbs. butter to the skillet. Lay two slices of bread in. Using half of the sandwich ingredients, lay cheese, sundried tomatoes, roasted peppers evenly on each slice. Add the arugula and basil to one slice and the ham, if using, to the other. Add the eggs.

When the bread is golden brown on the bottom, carefully flip one fully loaded slice on top of the other. Now, using the spatula (because who really needs that expensive panini press?) or a grill press, press down on that sandwich to flatten it a bit. Turn it over and press again.

Repeat with the other two slices of bread and remaining half of ingredients. Cut each sandwich in half. Serves four if you have fresh fruit or sides.

If you are still at a loss for recipes (or recommendations on your personal favorites to be “surprised” with), the folks at FruitAndVeggieGuru.com have come up with a list of easy-to-prepare Fruitful Mother’s Day Breakfast recipes.