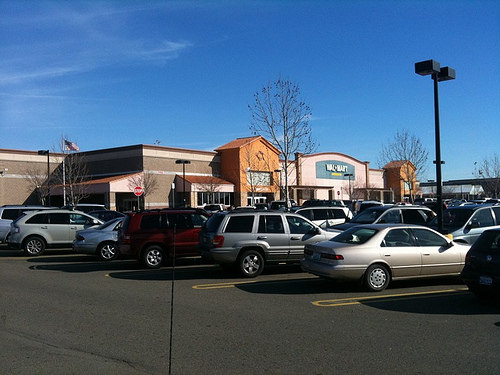 I had the chance to talk with Andrea Thomas, Wal-Mart’s Vice President of Sustainability, about Wal-Mart’s new healthy eating initiative. She kindly answered a few questions I had about the programs.

Andrea Thomas is responsible for the global sustainability program and she works a lot with different countries that Wal-Mart is located in and with the local merchants and operators within those countries. In making Wal-Mart more sustainable, she looks at greenhouse gases emitted by Wal-Mart in various ways, whether directly by Wal-Mart or by other producers because they need to transport goods to the stores. Her aim is for Wal-Mart to use 100% renewable energy and have 0% waste.

The healthy eating initiative started because customers kept saying they wanted to eat better and healthier foods, but felt it was confusing to select healthy packaged foods – and also more expensive. To make things better and easier for their customers, Wal-Mart began working with their in-house brands, Great Value and Marketside, to improve the health of the products.

With a goal of removing hydrogenated oils completely from the healthier foods, reducing sodium by 20%, and reducing added sugars by 10%, Wal-Mart has set fairly steep goals for themselves, but people are demanding better quality.

How will customers find these healthier products? Wal-Mart is developing a front-of-package seal to make it easier to identify the improved versions of the food. This will be important, since the current versions will still be available. (In other words, the current version of ranch dressing sold under the Great Value brand will still be for sale next to the newer reduced sugar and salt version of Great Value ranch dressing.)

Wal-Mart has been working closely with the FDA and the Michelle Obama’s Let’s Move Initiative to make sure their seal doesn’t conflict with the advice being given. The new front-of-package seal is designed to be consistent with the new 2010 dietary guidelines released by the USDA and Let’s Move.

How Soon Will We See the Seal?

They’ve already been working with their suppliers to get the new products ready. Wal-Mart is using 2008 as the baseline for the reformulations. Each reformulation needs to be tested with consumers to be certain it will sell well when it hits the shelves. Ms. Thomas gave me the example of flavored milks in the Great Value line. They’ve removed 25% of the sugar from them and customers have said they still like the taste.

She estimated that about 20% of Great Value items will eventually get the new seal. Not only packaged, processed food will qualify. Whole wheat pasta and low-fat milk will get the seal, but regular pasta and whole milk will not qualify.

By about mid-May we should see these products with the new seal starting to hit the shelves.

What About the Cost?

Wal-Mart intends to keep the cost of the newer, healthier products the same as the original. Often, any food with the word “healthy” on the label costs more than a similar product of the same brand that’s less healthy. Andrea Thomas said she wants to avoid that. Raising prices would defeat the initiative.

An important way to keep the costs down is removing costs from the supply chain. Transportation is a significant cost to Wal-Mart and is one of the reasons they started their move to local sourcing of fruits and vegetables.

When I asked about labeling products containing GMOs, Ms. Thomas told me there is not a big demand from U.S. consumers for labeling GMOs. In Europe, where there is more public concern with GMOs, Wal-Mart works with existing regulations to label appropriately. Right now, there is no U.S. policy on GMOs.

Why Would Wal-Mart Do This?

For the money. If Wal-Mart can produce the healthier foods that consumers are demanding these days and keep the prices low, customers will shop there instead of elsewhere. With more customers, Wal-Mart will be able to make more profit without raising prices. It’s not a bad strategy.

That may seem like a ridiculous question. Wal-Mart makes billions and our household food budgets are in the low three-digits. How can we do anything that would impact them?

We have to pay attention to their next moves. If customers don’t care whether Wal-Mart follows through with their plan, then a lot of these good ideas they’ve announced will be changed on a corporate level. If nobody cares, they won’t make more money and they won’t follow through.

When the seal comes out, compare the nutritional content to similar foods. Does the claim hold up? If not, we point it out, loudly and repeatedly, if necessary. Keep their feet to the fire, so to speak.

A lot of concern has been brought up about squeezing local farmers for the pennies to keep fresh, healthy foods cheaper. Wal-Mart has answered those concerns by pointing to reduced costs in the supply chain. What if Wal-Mart can’t pull enough savings out of the supply chain to keep costs down? If the farmers start to see lower prices for their products, we need to make sure it’s public knowledge.

I believe Wal-Mart intends to do the things they’re saying with this Healthy Eating Initiative. But it’s up to us to keep them accountable for their actions and make sure they come through with their promises.

Andrea Thomas has said she is interested in feedback and will answer follow-up questions.  For much of this initiative, we’ll have to wait and see.  What else would you like to know?