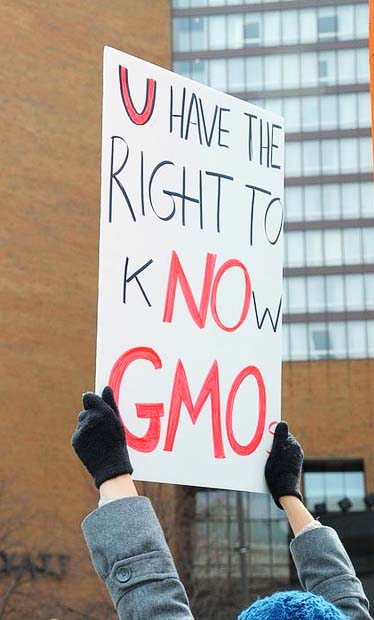 Facing overwhelming demand for mandatory labeling of genetically engineered foods, the biotechnology industry is furious that you might be allowed to know whether or not you’re buying their products. Monsanto has threatened to sue the entire state of Vermont, if GMO labeling bill H-722 passes.

Several states have bills pending that would require labeling of genetically engineered food products, but Vermont’s would be the first to become law. H-722 would require labeling of any food containing any amount of genetically modified ingredients, and would prohibit such foods from being labeled ‘natural,’ ‘naturally made,’ ‘all natural,’ or similar.

Chronic bad actor biotechnology behemoth Monsanto — having successfully used the courtroom as bully pulpit in the past — is threatening to put it’s giant corporate foot down on exactly what laws our legislators may and may not enact. According to reports, Monsanto’s legal displeasure may be enough to override VT consumers’ right to know what they’re eating:

With Vermont legislators now standing in the way of what could mean even more money for Monsanto, the company says they will sue the state if H-722 is approved. Now in fear of a lawsuit in the future, lawmakers in Vermont have put a hold on any future voting regarding the bill. If history is any indication, Monsanto is more than likely to have their way and win yet another battle.

The popular legislative bill requiring mandatory labels on genetically engineered food (H-722) is languishing in the Vermont House Agriculture Committee, with only four weeks left until the legislature adjourns for the year. Despite thousands of emails and calls from constituents who overwhelmingly support mandatory labeling, despite the fact that a majority (6 to 5) of Agriculture Committee members support passage of the measure, Vermont legislators are holding up the labeling bill and refusing to take a vote.

Instead, they’re calling for more public hearings on April 12, in the apparent hope that they can run out the clock until the legislative session ends in early May.

What happened to the formerly staunch legislative champions of Vermont’s “right to know” bill? They lost their nerve and abandoned their principles after Monsanto representative recently threatened a public official that the biotech giant would sue Vermont if they dared to pass the bill.

Does anyone else see a dangerous precedent here?! Legislators are supposed to serve the public — the consumers who want GMO labeling, for reasons the biotechnology industry clearly wishes people would stop knowing about. The fact that Monsanto disapproves of what ‘we, the people’ want from our legislators should be irrelevant — instead, it’s clearly shaping up to be the deciding factor.

There is no good excuse to reward a spoiled child for throwing a tantrum; similarly there’s absolutely no reason for an alleged republic to tolerate corporate attempts to manipulate state law, for their own benefit and at the expense of the consumers who put those legislators into office.

If you think this smells like a big rancid pile of toxic waste, and you live in or near Vermont, attend the public hearing April 12th to show support for H-722. There’s also a pre-hearing GMO labeling rally, with free bus transport to Montpelier organized by Vermont Right to Know GMOs. According to organizers,

After the rally anyone who is interested will be given a chance to testify before the House Agriculture Committee from 6:30 – 8:30. Sign up by 6pm in the State House to speak at the hearing.

If you can get there, for goodness sake: speak at the hearing! Vermont residents, call your legislators and tell them they work for YOU, not Monsanto — and you expect them to act like it.

The only thing legislators hate more than lawsuits is bad press. Vermont residents, write a letter to the editor of your favorite local publication. Share information about this issue on all your social networks — the more people who know about the problem, the harder it is for politicians to crumple like wet paper bags before Monsanto’s bluster.

Wherever you live, sign this to let them know we think this is a big deal, and won’t reward bad behavior with political cookies. Consumer awareness, and refusal to accept anything less: that’s what will get us GMO labels eventually, with or without Monsanto’s approval.

Is Monsanto pure evil or is this just a corporate mission we can’t understand? Their motto appears to be “Do the Wrong Thing.”

Hopefully Vermont legislators will stand up to the schoolyard bully, and do what they’re paid to do: pass legislation that benefits the actual people of Vermont, rather than just Monsanto’s bottom line.