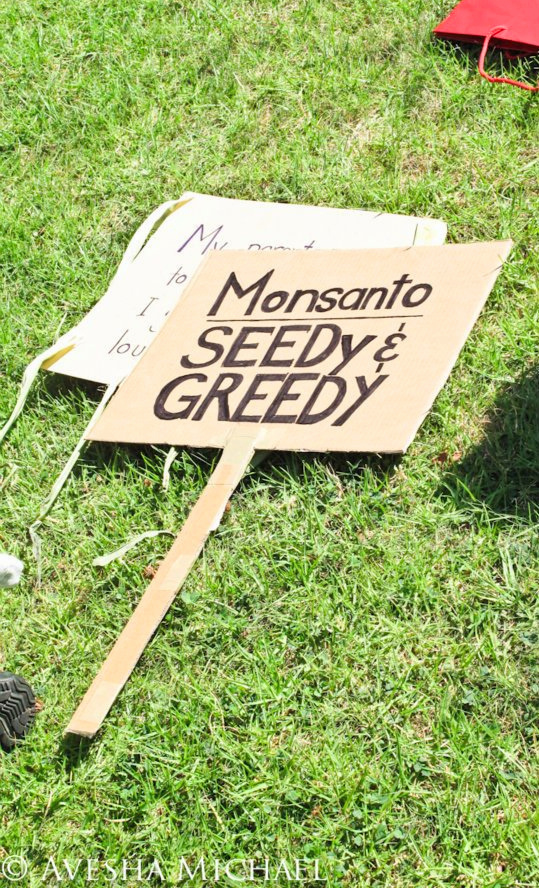 Along with a hideous corporate conduct record regarding toxic pollution, Monsanto has proven repeatedly that it is anything but friendly to the family farmer:

Between 1997 and 2010, Monsanto admits to filing 144 lawsuits against America’s family farmers, while settling another 700 out of court for undisclosed amounts. Due to these aggressive lawsuits, Monsanto has created an atmosphere of fear in rural America and driven dozens of farmers into bankruptcy.

On January 31, 2012, oral arguments begin in a landmark case filed against Monsanto by 270,000 individuals represented by the Organic Seed Growers and Trade Association. The lawsuit seeks protection for organic farmers whose crops are contaminated by unwanted GM seeds or pollen. According to the Institute for Agriculture and Trade Policy,

Farmers are being sued for having GMOs on their property that they did not buy, do not want, will not use and cannot sell,” says North Dakota farmer, Tom Wiley. “If I contaminate my neighbor’s property, I am held responsible. Farmers need legal protections to ensure that if the biotech industry contaminates their crops with GMOs, the industry is held responsible.

After decades of riding roughshod over the American farming community, Monsanto now stands to be made accountable for some of the problems GE contamination causes small-scale and organic farmers. Naturally, they are maneuvering like crazy to avoid anything of the sort, and hope to have the case dismissed. So on January 31, a district court judge will begin hearing arguments for and against Monsanto’s motion to dismiss, marking what could be real turning point (one way or another) for the rights of U.S. farmers and consumers. Get involvedif you think organic farmers deserve legal protection from Monsanto’s overly-aggressive patent litigation, and if you value consumers’ rights to choose organic food.

Despite decades of problem behavior, Monsanto continues to thrive. So far, their PR guys are earning their keep: profits just keep on climbing. These court cases against Monsanto are a big deal for consumers, because they provide a better view of this company than any billboard or bus-bench ad or dreamy soft-focus TV commercial ever will. An informed consumer base is the only solution– watch these cases closely, and see if Monsanto’s actions match their spin!  If you look past the advertising, you won’t want this company anywhere near your food supply.

For a more in-depth (read: more disturbing) look at Monsanto’s approach to growing our food — meanwhile abusing farmers, providing food of questionable safety, contaminating the environment with toxic chemistry, and devastating agricultural communities around the world — watch The World According to Monsanto. It’ll make you angry; but

ignorance is only bliss until it bites you in the bottom

like these court cases, it’s definitely well worth watching!