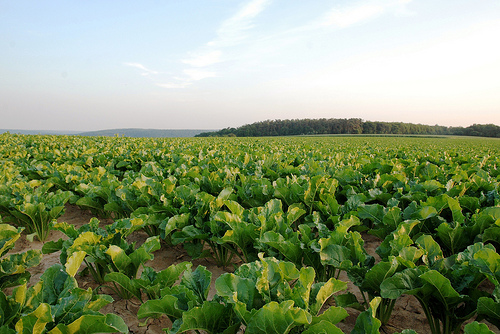 Have you been following the continuing Monsanto sugar beet saga?

The FDA approved the genetically modified sugar beets back in 2005, then in 2009 a judge in San Francisco ruled that the approval was illegal, due to a “significant effect” from cross-contamination. Basically, the risk of GM sugar beets contaminating non-GMO beets and Swiss chard crops was too high.

This August, U.S. District Judge Jeffrey White upheld the ban, citing the original issue with cross-contamination as well as a concern that Roundup Ready crops actually cause farmers to use more pesticides in the long term, as Roundup resistant weeds start popping up.

That brings us to yesterday, when a federal judge ordered beets planted after that August ruling needed to be destroyed.

Beets Planted After the Ruling?

Earthjustice, a consumer group that brought the case against the USDA and had asked the judge to order the young plants be destroyed, said the action was the first court-ordered destruction of a GMO crop.

“We had to run into court and ask the judge to stop them,” said Earthjustice attorney Paul Achitoff. “He said you’ve got to tear up the plants, which was what we asked him to do. It’s an extreme sort of a thing … but the circumstances were such that there really wasn’t any alternative. They basically had dared the court to stop them.”

Monsanto is arguing that it needs planting permits in order to continue research and development of GM sugar beets. They’re betting that the ban GM sugar beets won’t last, and they want to be able to maintain their GM seed supply so that they can sell them if they ever become legal.

Sugar beets make up about half of the U.S. sugar supply, and before the ban, many farmers were using the GM sugar beets so that they could spray Roundup for weed control.

What are your thoughts about the ban on GM sugar beets?