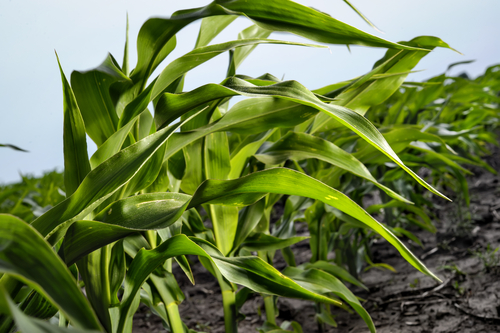 Monsanto has submitted a new genetically modified corn to the USDA for approval. This corn is resistant not only to Roundup but to another, even more toxic pesticide called dicamba.

Monsanto and other biotech companies are working on new pesticide-resistant crops because weeds are becoming increasingly resistant to Roundup. Their solution, of course, is to create plants designed to be sprayed with even more toxic chemicals that they just happen to sell.

When GMOs were first introduced, the line was that they’d mean using fewer pesticides to grow our food. And it’s true that at first, pesticide use dropped. As resistant superweeds have sprung up, though, pesticide use on GMO crops has increased. There’s no reason to expect that this won’t happen with dicamba.

The new corn is engineered to withstand a mixture of dicamba and Roundup designed to kill the superweeds that are resistant to Roundup alone.

Dicamba is not new in the world of agriculture. According to RT: “Dicamba was first approved in 1967 and has been linked to high rates of cancer and birth defects in the families of food growers, according to government and other scientific studies.” That means it probably won’t hurt you to eat dicamba-sprayed corn, but it’s very harmful for the people who grow our food or who live near industrial farms.

Dicamba doesn’t just kill weeds in corn fields. It’s also toxic to other plants, like tomatoes, squash, beans, and peas. That creates additional problems with dicamba use: drift and volatility. The simplified version of both issues is that dicamba sprayed in one field doesn’t stay put, and that’s worrisome to many farmers.

Drift occurs during the spray process. When a farmer sprays dicamba on a field, it can blow into surrounding fields. Volatility is a concern after application. Dicamba changes from a liquid to a gas as it sits, and that gas can move to surrounding fields. If you’re a tomato grower with fields next to someone growing dicamba-resistant corn, your crops are suddenly in danger.

We’re already not growing enough healthy vegetables for our population. The last thing we need is to put so-called “specialty crops” in danger.

The USDA is deciding now whether to approve Monsanto’s new dicamba-tolerant GMO corn. If you want to tell them how you feel about this new technnology, Food & Water Watch makes it easy to send a message to the agency.