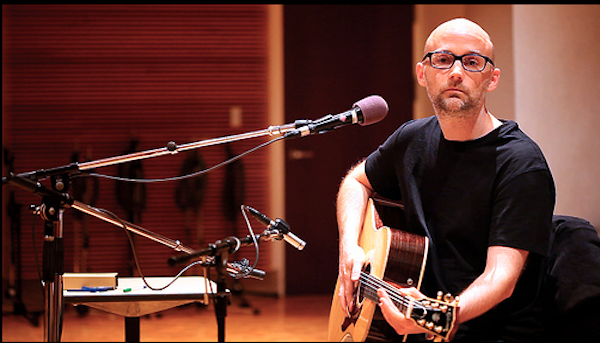 To his fans, it’s no secret that Moby is a long-time vegan. What’s new though is that Rolling Stone published an op-ed by the musician about why he’s maintained a vegan diet for twenty-seven years.

With Beyoncé and other celebs dabbling with veganism for the health benefits like weight loss, or the environmental concern that started Al Gore’s transition, we hear a lot about the vegan diet in the news lately.

But Moby gives us that much-needed reminder about why the vegan diet exists in the first place: to decrease (dare I say eliminate) animal suffering. His story starts out the way many forays into veganism do: he fell in love with animals. That’s not hard to do when you grow up surrounded by critters, like Moby did.

I loved our animals. When one died I was heartbroken, crying inconsolably at the sad and bitterly unfair death of whichever dog or cat or mouse or lizard had died (and, with so many animals there was a lot of dying and crying).

So, he says, by 1987 he gave up all animal products after first becoming a vegetarian.

Simply so that I could eat and live in accordance with my beliefs that animals have their own lives, that they’re entitled to their own lives and that contributing to animal suffering is something that I don’t want to be a part of.

Whether you make a decision to follow Beyoncé’s lead or Al Gore’s into the vegan diet, hopefully it brings you to Moby’s awareness. What we eat doesn’t just impact our health, or the health of our environment. Even though those things really matter. But when we stop eating meat, eggs, dairy and even honey, we can also stop the suffering those foods cause—no matter what spurred us to abstain from them in the first place.

Hopefully, like Moby, we are able to see the interconnectedness of all things—that our health shouldn’t come as a result of chickens being tortured, or that damage to the environment shouldn’t be the result of pigs confined to waste-filled cages.

Moby asks “Could you look a baby cow in its eyes and say to it, ‘My appetite is more important than your suffering’?” Could you? Should you?