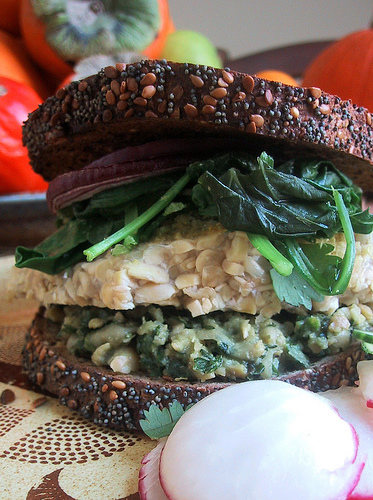 During my first year of being vegan, I didn’t really know what to eat.  The fact that I was a teenager who had never learned to prepare anything more complicated than a bowl of cereal probably didn’t help much, but suffice it to say that twelve months involved a steep culinary learning curve.  I ate a lot of Amy’s frozen burritos, apples, and salads that consisted of spinach, black beans, and lemon juice.  Unappetizing indeed!  Sometimes I think it’s a wonder that I managed to stay healthy during this period, or even that I stuck out being vegan at all.

I also noticed during that year that I never bought any bread.  What’s the use of bread when you don’t eat meat to put in between it?  Thankfully, I rediscovered the sandwich in all of its vegan glory.  Sometimes, complicated food (you know, the kind that requires a knife and fork) just doesn’t work.  There are days when I need something that’s easy to make, easy to eat, and will keep me energized.

In addition to making you feel super healthy, these sandwiches will make you feel super happy: They’re cheaper than deli meats and cheeses, and have a much lower carbon footprint!  All sandwiches use good-for-you whole grain bread.

–Meatless Monday: An Old-Fashioned Idea, an Tahini for Breakfast

–10 Animal-Free Meal Ideas From Your Pantry