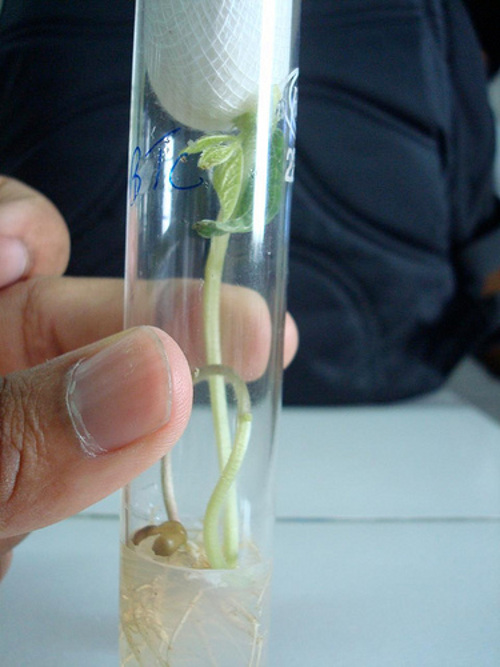 From what I read and hear, I’m convinced that there are three groups which tend to over-estimate the global role of Monsanto. These include:

Some people say that Monsanto has an overly powerful, controlling influence over the food supply. Other people say that Monsanto’s technologies are the key to continuing to feed the world even with climate change and a population headed to 9 billion. I think that if we put aside the rhetoric and look at the numbers, it will turn out that both of these assertions are over-stated. Lets ask some questions.

How Widespread Are Monsanto’s Traits?

As the chart above shows, Monsanto’s biotech traits are extremely popular with the farmers growing four major crops, but the vast majority of crop area around the world has no Monsanto traits at all and much of it never will. Even within the GMO crops, Monsanto’s traits are often being sold in genetic lines developed by other seed companies. A good biotech trait is only attractive to a farmer if it is in a plant line that is well adapted to the specific region and which has other desirable growing characteristics. People should remember that farmers are independent business people who will purchase the seeds and traits that optimize their operation. Monsanto will only be able to retain its trait customers as long as it delivers real value. As Monsanto’s traits begin to move off-patent, it is not clear how much of the market they will continue to serve. Monsanto is a potent seed/trait competitor in a few crops, but that does not amount to “monopoly control” of the food supply.

How Does Monsanto Compare to It’s Competitors?

The graph above compares Monsanto with its major direct competitors. Although it has the highest sales in 2008, there are several other very significant players. Also, while Monsanto is highly focused on seeds and traits, these other players also develop and sell the many other production tools that farmers need no matter whose seed they are using. These include the seed treatments, herbicides, fungicides,insecticides and plant growth regulators which are all critical to the food supply challenge that we face. What Monsanto does is actually a limited part of the “sustainable food supply” story. A few of the other leading companies in this list invest the billions of dollars it take to keep coming up with new, more effective, and even safer crop protection products. These same chemical discovery programs also provide new options for everything from flea treatments for pets to mold resistant building products to the mosquito control netting that saves millions from Malaria every year. Monsanto is just one specialized actor in a diversified, crop protection industry that offers a wide range of tools to farmers. Still, none of these players “control” the farming sector. They simply serve it.

How Does Monsanto Stack Up to Other Food System Players?

From the graph above it is apparent that Monsanto is dwarfed by many of the other companies in the food system. The farm equipment companies John Deere and Case/IH are much bigger. The grain trading giants (e.g. ADM and Cargill) and large food processing companies (e.g. Kellogg, General Mills, Kraft and PepsiCo) have far more sales and far more leverage in the food market. A company like McDonalds was able to kill Monsanto’s biotech potatoes with three phone calls (for brand protection reasons, not safety) because it is larger and has so much more leverage with growers.

The 14 top grocery retailers in the US all have higher sales than Monsanto. The most dramatic contrast is with Wal-Mart whose food sales alone represent more than 12 times the sales of Monsanto. Who do you think has more “control” over the food system?

The food supply is certainly not “controlled by Monsanto” as asserted in many anti-Monsanto diatribes. Yes, Monsanto is a formidable competitor in a specific part of the global seed industry, but that is just a very small part of the big picture.

Yes, Monsanto’s existing and upcoming technologies will play an extremely important role in the food supply challenge ahead of us, but only because they are complimented by other critical tools that are being developed by other companies. Its a good thing that there are so many contributors because this is a huge undertaking.

Monsanto is neither the demonic or heroic force it is often claimed to be. It is a major player in its selected sector. It is just a part of the overall picture.

(Full disclosure: I have consulted for Monsanto in the past but not for several years. What I have written here only represents my own opinions. I also consult broadly across the agricultural sector)