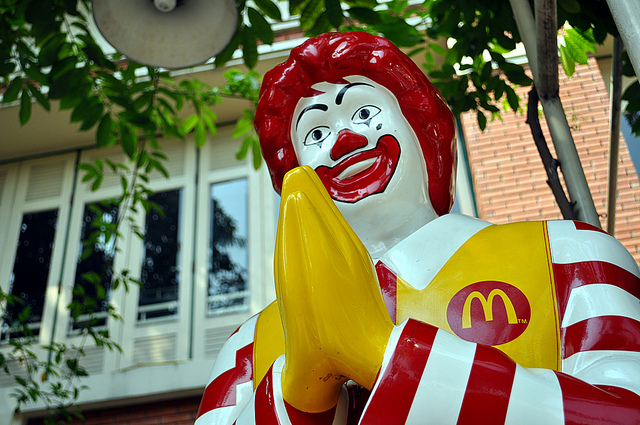 This year, many McDonald’s locations will be open on Christmas day.

Even Walmart is closed on Christmas day, but according to a report from Advertising Age, when some big arches locations were opened last year on Christmas, they took in a whopping $5,500 per location on average. Couple that with the company seeing $36 million in sales when they stayed open on Thanksgiving day and a dip in their overall 2012 sales, and it’s no wonder corporate HQ is encouraging franchises to stay open. After all, it’s all about profits.

McDonald’s has around 14,000 restaurants here in the U.S., so if they’re taking in an average of $5,500 apiece on Tuesday, the company stands to make an extra $77 million for the month of December. That is a lot of Big Macs (and heart disease)!

Here in the U.S. minimum wage workers like the ones who will be working the fryers at McDonald’s on Christmas day are basically at the mercy of their employers in many ways. With unemployment still so high, quitting isn’t always an option, because there’s a chance they won’t be able to find work elsewhere. When you have a family to support, a job is a job, and if your below-the-poverty-line-paying employer tells you to come in on Christmas, you come in on Christmas.

I think the thing that really gets me about this push from McDonald’s isn’t that folks will be working on Christmas necessarily, but that the employees who are leaving their families on Christmas most likely won’t see a dime of that $77 million beyond their regular wages. McDonald’s doesn’t even give overtime pay for working on holidays. I’ve had jobs that required me to work on holidays, and we always received overtime pay (time and a half) at the very least and sometimes holiday pay was double our hourly wage.

Just last month, Wal-Mart employees held massive strikes to protest the chain’s worker treatment, including the decision to open on Thanksgiving day, and in some areas fast food workers have begun organizing for better treatment and wages. Will we see protests from McDonald’s workers in the coming days?