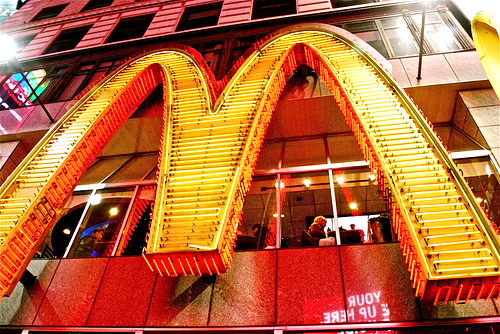 McDonald’s announced to pork suppliers Monday that it wants gestation crates phased out. Due to the fast-food giant’s massive purchasing power, its new gestation crate policy might just be the tipping point that ends this inhumane practice in the US pork industry. McDonald’s deserves kudos for using their powers for Good and not (at least for the moment) Evil; this is a big deal! But the even-bigger deal is the reason for the change.

With support from HSUS, McDonald’s released a statement Monday anouncing its intention to require a phase-out of gestation crates for pregnant sows, which (along with battery cages for laying hens) has been called one of the most cruel types of animal confinement in modern agriculture.

“McDonald’s believes gestation stalls are not a sustainable production system for the future. There are alternatives that we think are better for the welfare of sows,” said Dan Gorsky, senior vice president of McDonald’s North America Supply Chain Management. “McDonald’s wants to see the end of sow confinement in gestation stalls in our supply chain. We are beginning an assessment with our U.S. suppliers to determine how to build on the work already underway to reach that goal. In May, after receiving our suppliers’ plans, we’ll share results from the assessment and our next steps.”

McDonald’s isn’t the first restaurant chain to move away from this form of cruel confinement — Chipotle led the way, and other fast food companies have reduced purchasing from suppliers who use gestation crates. According to the Chicago Tribune,

Fast-food competitors have cut back on the amount of pork raised in gestational crates, but McDonald’s is the first major restaurant chain — aside from Chipotle — looking to phase it out entirely, experts say. Chipotle Mexican Grill required that its suppliers stop using crates about 12 years ago.

In fiscal 2011, 20 percent of Burger King‘s pork was produced without gestation stalls. And Wendy’s has given preferential treatment to pork not produced in gestation stalls in the U.S. and Canada since 2007.

“Activity by McDonald’s is awfully significant, and we expect it will have a catalytic effect within the fast-food sector and other segments of the retail industry,” Humane Society President Wayne Pacelle said Monday.

He added that the crates, which have been the industry standard for decades, were unregulated a decade ago, but now eight states, including Florida, Maine and Arizona, have banned them.

The McDonald’s gestation crate announcement comes on the heels of an historic alliance between United Egg Producers and HSUS to support federal protections for laying hens, specifically the phasing out of battery cages. Most people — even most enthusiastically meat-eating dairy-eating egg-eating people — want farm animals to be treated decently. Thanks in part to recent mainstream media like Food, Inc., Fast Food Nation, and Eating Animals, more US consumers are realizing that factory farming has embraced some animal treatment standards that leave puppy mills and dog-fighting rings in the dust. Cruelty is cruelty, and most consumers don’t want it.

McDonald’s new pork policy is a response to market pressure. They didn’t just sit around and suddenly have a tender moment of compassion for pregnant pigs being treated horribly. This is a consumer-driven, demand-driven decision: steadily growing numbers of conscious consumers want more ethically produced food! McDonald’s gets credit for responding to this demand; but the hog’s share of the credit goes to consumers who’ve been agitating for the change.

The best way to avoid infliction of cruelty on farmed animals is to simply eat other things. The move away from gestation crates and battery cages doesn’t make me want to scarf down pig bits, or eggs. McDonald’s decision to require producers to phase out gestation crates won’t convince me, personally, to eat at McDonald’s.

But the fact that the biggest of the big fast-food fish has realized that consumers don’t want intensive animal confinement: that is huge! McDonald’s new pork mandate represents enormous progress, for the treatment of farmed animals and for consumers who value less vs. more animal cruelty in modern animal agriculture.

Guys, I hate to say it, but I think I feel some cautious optimism! With more and more people joining the ranks of the ecovores, factory farming and intensive animal confinement practices just don’t seem to be faring very well (and good riddance to ’em!). To everyone who is paying attention to what you eat, where it comes from, and what cruel practices were or weren’t inflicted on it when it was a living breathing creature before it appeared on your plate: you’re doing great! Keep it up!

Because — as the pork industry found out this week — it seems to be working.