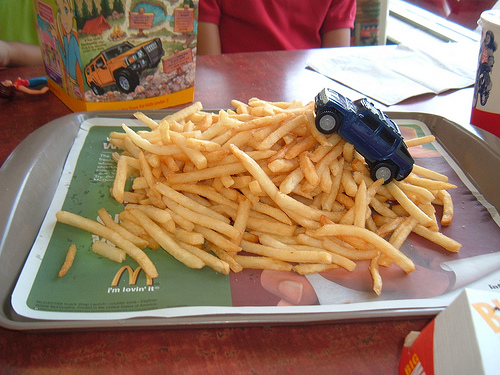 I know, I know, if you’re trying to eat healthy, sustainable food, chances are McDonald’s isn’t your go-to. It seems that the folks at the golden arches are catching on to the growing profood movement, and this week they launched a brand new ad campaign to speak to us farm to table types.

Our friends at Ecopreneurist hipped us to McDonald’s new farm fresh campaign. Check it:

So What is McDonald’s is Trying to Convey through this Ad?

If they are trying to say potato fries taste better than raw potatoes, that is a true statement. But it seems like that is where the story telling also begins. Just because potatoes, that go into making millions of pounds of fries every day, are grown on a farm that does not qualify McDonald’s as a slow food proponent. In fact McDonald’s does not have any personal connection with these farmers at all. They source their produce through middlemen or suppliers like Cargill, Lopez Foods, Golden State Foods, Simplot who contract with thousands of farmers like Martinez. Truly speaking, it would be difficult for even McDonald’s to pinpoint their produce and meat sources, just to give you an idea of the scale they operate on. So why is McDonald’s trying to be something they are obviously not.

What do you guys think? Harmless ad campaign or shameless greenwash? I’m leaning toward the latter…