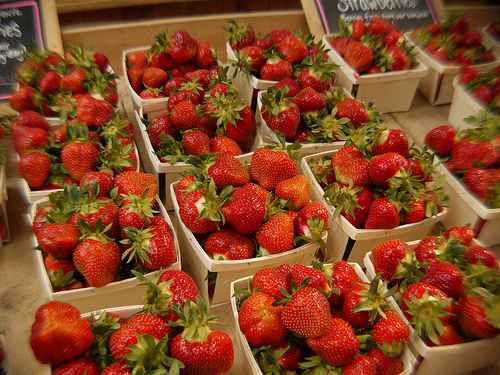 With strawberry season coming up, it’s worth it to bring up that California has controversially approved methyl iodide – a rather nasty pesticide – for use.

California grows a very large percentage of fruits and vegetables for the US, and strawberries are maybe one of the most noteworthy.  Here’s why:

Effects of the pesticide methyl iodide

Methyl iodide is a known toxin and cancer-causing agent. Even the CDC and USDA state that methyl iodide exhibits high toxicity when inhaled or ingested.

It’s so toxic…that’s why it makes a great pesticide…makes sense.

Methyl iodide is a fumigant* pesticide. The soil to be planted is covered with a giant tarp, and the pesticide is injected into the soil. The plants are planted after the soil has been fumigated.

Since it is not sprayed on directly food, this reduces the risk of directly ingesting the pesticide.  However, indirectly it could be consumed through soil contamination and run-off into water supplies even if California is claiming that great care will be taken.

Why strawberries are particularly vulnerable to pesticides

Strawberries are one of the ‘dirty dozen‘ – the twelve foods most likely to expose people to pesticides.

Because of their seeded texture and thin skin, it is more likely that any pesticide that comes in contact with the outside will stick even after washing, or even seep through the skin into the fruit.

Even though this particular pesticide is not sprayed directly on the fruit, is it possible that it, or its by-products, can work it’s way onto the fruit from the fumigated soil?  Can the strawberries take the by-products up from the soil?

That’s not something I really want to find out the hard way, and the long-term effects of this have not been studied properly.

What you can do

Make yourself heard. While the EPA was asking for comments from the public until April 30th and that deadline has passed, if you feel very strongly about it, the people at Food Democracy Now will probably be happy to help you get in touch with someone who has influence: contact them.

*This version has been corrected to state that methyl iodine is a fumigant pesticide.