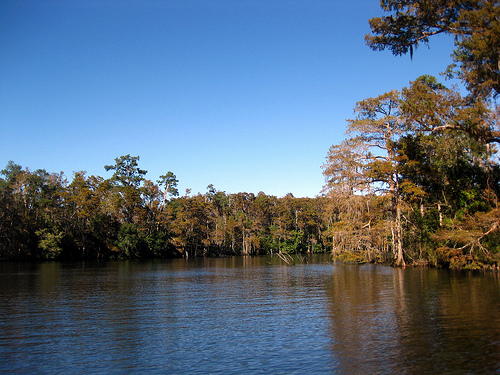 A paper mill in Bogalusa, Louisiana released black liquor into the Pearl River and killed hundreds of thousands of fish, shellfish, and turtles. Forty-seven miles of river is affected and the damage reaches into Lake Pontchartrain, just north of New Orleans. A notice has been posted not to eat the fish from the Pearl River.

On Tuesday, August 9, computers at Temple-Inland’s Bogalusa paper mill sounded alarms that indicated an overflow of black liquor. The paper mill has a permit allowing a limited amount of properly treated black liquor to be released into the Pearl River. However, operations were not stopped at this time.

A Temple-Inland press release shows that the company waited for the results of “predictive testing” before “taking corrective actions to restore the water quality of the River.” The paper mill was shut down on August 13, after the Pearl River had turned black and the water was clogged with dead fish, shellfish, and turtles.

Gulf sturgeon, a fish listed as near threatened on the IUCN Red List of Threatened Species, spawns in the Pearl River and other rivers that empty into the Gulf of Mexico. The ringed sawback turtle is found only in the Pearl River and Bogue Chitto River. Other animals killed include heelsplitter mussels, bass, catfish, and flounder.

The sequence of events leading up to the shut down is odd, though. On Saturday morning, August 13, a reporter received a tip about hundreds of thousands of dead fish in the Pearl River. The reporter verified it and called the Louisiana Department of Environmental Quality (DEQ) for comment. DEQ hadn’t heard about it and sent scientists to the Pearl River.

Temple-Inland notified DEQ of the black liquor release eight hours after the DEQ scientists arrived at the Pearl River site. Temple-Inland shut down the paper mill on Saturday evening.

What is Black Liquor?

Black liquor is produced during the paper-making process. It consists of a watery solution with organic compounds from the wood and some chemicals, such as sodium hydroxide and sodium sulfide.

The remaining black liquor is then passed through aerated retaining ponds and treated before releasing into a waterway. Under ordinary circumstances, and if the trees are harvested sustainably, the production of paper can be nearly environmentally neutral.

A report in the Slidell Sentry indicates a management change three years ago brought about a variety of undesirable changes. Before the change from Inland to Temple-Inland in January 2008, according to the article, the paper mill had won numerous awards and was in compliance with DEQ and EPA regulations.

What Is Being Done?

The DEQ notified Temple-Inland that they were liable for the fish kill. DEQ also issued a compliance order and a notice of potential penalty.

The DEQ maintains that no toxins were released into the water and that the animals died of lack of oxygen, as a result of the black liquor in the river.

A notice was posted Sunday, August 14 letting people know not to eat animals from the Pearl River. At that time, the black liquor had been in the water six days. It’s a popular sport fishing area and I’m sure plenty of people had already taken fish home to eat.

No cities take their drinking water from the Pearl River.

There is no word yet on when the paper mill will reopen. 600 people are employed by the mill.