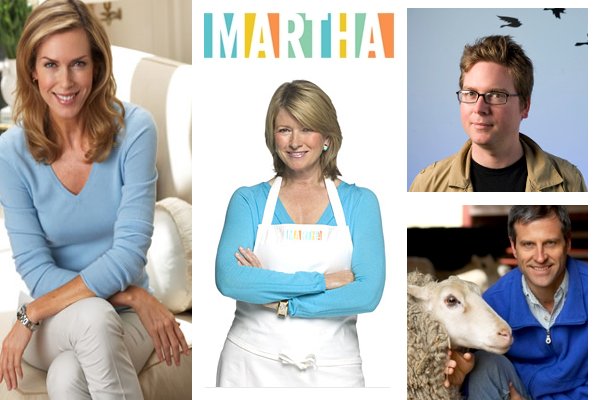 Farm Sanctuary is an amazing organization that I would give a ton of props to. And, news to me, the organization apparently convinced Twitter co-founder Biz Stone to go vegan. Martha Stewart had both Biz Stone and Farm Sanctuary’s co-founder and president Gene Baur on the show, as well as Kathy Freston, author of Veganist

(who was also on the Oprah vegan show and helped lead the Harpo staff of 378 on a one-week vegan challenge).

Yes, veganism has hit the mainstream pretty strongly this year.

Martha and Biz Stone made a Seitan Bourguignon and Parsley-Leaf Salad together. Biz also commented on how visiting Farm Sanctuary’s New York Shelter and looking into the eyes of a cow changed his life. Biz will be the Honorary Chair of Farm Sanctuary’ s 25th Anniversary Gala in Los Angeles this September.

Martha also shared a Vegan Snack Bars recipe with Kathy Freston as Kathy talked about veganism, including some of its health benefits. And Gene Baur and Martha discussed Farm Sanctuary’s work protecting animals from cruelty and factory farming and its actual farms for mistreated factory farm animals, as well as a couple of special animals.

“With humor, personal anecdotes and factual expertise, Biz and Kathy showed Martha — and the people watching at home across the U.S. — how fun and easy veganism can be,” Baur wrote today.

Baur introduced viewers to Persia, “the sheep who Martha adopted through our Adopt-A-Farm Animal Project back in February,” and a special cow named Opie.

I told Martha about my dear friend Opie, who I found as a calf dying of hypothermia at a stockyard with a temperature so low it wouldn’t even register on the thermometer. Viewers saw incredible “before” and “after” photos of Opie, who with proper care and support pulled through and grew up to weigh nearly 3,000 pounds and to enjoy a long, happy life at Farm Sanctuary.

What more could you ask for from a single episode? (Of course, asking Martha and Oprah to go beyond an episode or week could make an even bigger difference….) For now, though, I’m happy :D

Image via one green planet