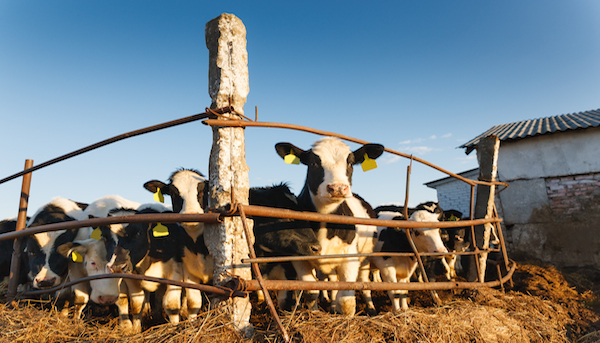 The Energy Department’s methane biogas program has been chugging away in relatively obscurity for several years, and now that’s all about to change.  The agency has just teamed up with EPA and the Department of Agriculture to announce a new initiative for ramping up manure-to-biogas at dairy farms and other farming operations, called the Biogas Opportunities Roadmap.

According to DOE, right now there are about 240 anaerobic digesters on farms in the US,  churning out enough livestock biogas to power about 70,000 US homes. That’s a good number but it’s chump change in terms of overall US energy consumption.

Dig a little deeper, and you’ll find that the contribution could be much more significant. DOE estimates that with sufficient support in terms of technology and marketing, there could be another 11,000 biogas systems in operation.

All together, these systems could produce enough energy for about 3 million typical homes.

When you take into account the Obama Administration’s focus on breaking down the country’s monolithic fossil energy profile into networks of local and regionally produced renewable energy, you can see how livestock biogas could play an even more significant role in particular communities.

DOE uses the example of in Kewaunee County, Wisconsin, which supports about 8,900 households. In that county three wind farms and two anaerobic digesters (both located on dairy farms) already provide enough power for the equivalent of 8,000 households. Add some distributed solar and/or a few more wind turbines along with advanced energy storage and smart grid systems, and you’ve got an entire county that has self-sufficiency in view, at least for renewably sourced electricity.

What Is Livestock Biogas?

If you’ve been following CleanTechnica for a while this is familiar ground, so bear with us for a minute. Methane-rich biogas is produce from manure (and human waste, for that matter), when microorganisms digest organic material. Think farting and you’re on the right track.

In nature, the process works relatively slowly, and methane — a powerful greenhouse gas — is released into the atmosphere. If you enclose your manure in an airless tank called an anaerobic digester, you can optimize the environment to speed up the process, and you can also capture all that methane gas.

Aside from putting the gas to use, you’re also transforming raw manure from a liquidy disposal risk into a solid, inert (non-smelly) organic material that can be safely used as a soil enhancer. In other words, goodbye to those notorious open manure lagoons.

That all sounds peachy, but the sticky wicket is how to get livestock farmers to invest in anaerobic digesters, given the limited state of the market for methane biogas and manure-derived soil enhancer.

There’s always the big stick, which would be to make the consequences of manure dumpingtoo expensive to continue as a matter of routine practice.

The Biogas Opportunities Roadmap (here’s a handy fact sheet) offers the carrot instead. As the title suggests, the idea is to make it easier for livestock farmers to identify and take advantage of opportunities for maximizing the value of an anaerobic digester.

Aside from being a nicer way to conduct business, you also get bennies in terms of local economic development, including the potential for existing farms to expand without running afoul of environmental regulations for manure disposal.

Here’s the strategy in a nutshell:

The Opportunities Roadmap also lays out a plan for the U.S. Department of Agriculture, Department of Energy and the Environmental Protection Agency to use existing programs to enhance the use of biogas systems in the U.S by conducting research to accelerate the development of bio-based products from biomass systems and strengthening programs that support farmers as they install these systems on their operations, among other things.

The steps that the roadmap lays out include ramping up existing USDA, DOE, and EPA programs to improve biogas systems technology.

The three agencies will also coordinate efforts to streamline the integration of livestock biogas into the fossil natural gas market.

On its part, USDA will spearhead improvements in data collection and analysis, to create a stronger platform for federal grants in support of biogas systems.

Working alongside the three federal agencies are stakeholders in the agriculture and biogas industries.

They’re not letting any grass grow under their feet. The plan is to establish a Biogas Opportunities Roadmap Working Group and generate a progress report in August 2015.

Aside from enabling livestock farmers to squeeze extra value out of their operations, the main thrust of the roadmap is to help the livestock industry reduce its energy intensity and reduce its greenhouse gas emissions.

DOE’s announcement of the roadmap doesn’t mention another important consideration, which is the preservation of local water resources.  As illustrated by New York and Vermont, water resource protection can also play a critical role in supporting local livestock biogas investments.