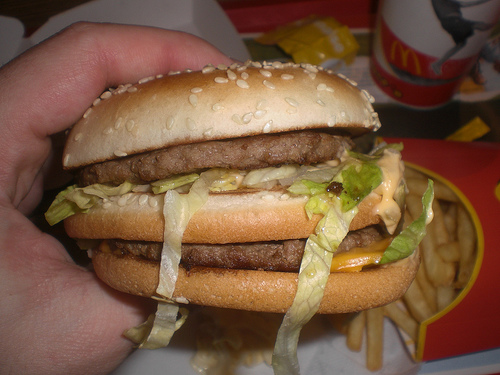 If you do the math, that’s nearly two Big Macs a day! He has only gone 8 days in 39 years sans Big Mac, and it works out to 13.5 million Big Mac calories!

He is not only still alive, but he claims to keep a relatively clean bill of health given his twice daily indulgences.

Gorske appeared in the documentary Super Size Me, which followed Morgan Spurlock in a month-long quest to eat only McDonald’s for every meal. Spurlock’s bill-of-health wasn’t so clean, even after only a month of daily McDonald’s. His cholesterol increased; he gained loads of weight; he felt ill…. Well, not Don Gorske.  He claims a cholesterol level of 140.

A big difference between the two men is that Gorske apparently does not usually accompany his 25,000 Big Macs with 25,000 fries or 25,000 liters of soda, whereas Spurlock not only indulged in them every time, but Supersized them.

French fries and soda are nearly entirely empty calories, meaning they provide very little nutrition per calorie. A Big Mac, while no nutritional gem, at least contains some essential nutrients, such as iron and calcium.

Some people are just lucky. They have good genetics, a fast metabolism, so they are able to punish their bodies with something like two Big Macs a day. Most people cannot, and probably, nobody should.