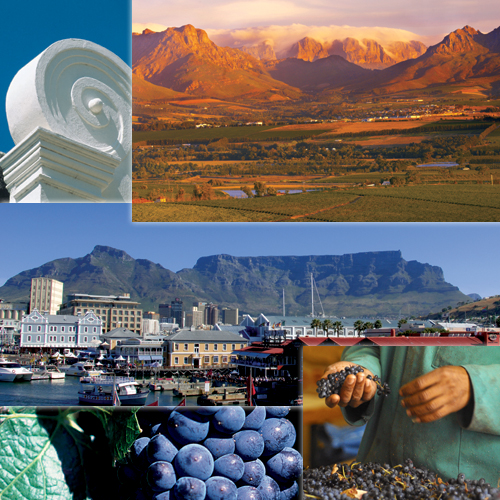 This is the third post in a series from Tom Lynch, Founder of Worthwhile Wine Company. Tom is currently traveling through South Africa from village to vineyard and sharing his experiences from both settings here.

Just as South Africa’s country and economy include bits of G-20 country and 3rd World country, this trip includes Isipho non-profit work in rural, poor South Africa working on malnutrition, and Cape Wine Lands wine estates building the business of sustainable wineries in the US through Worthwhile Wine Company. The last bit of my trip has focused on the topic of great wine.

What Makes a Great Wine?

In most places where wine is made, there is a very distinct definition of “great wine.” Writer Karen MacNeil said:

Wine is a look into the heart of a place. Which is why I don’t believe wine can be thought about apart from the consideration of the place it is made.

The California Cab is big and bold with cassis, tobacco, tannins, and a few other complimentary things tossed in around that core.  In Bordeaux there is elegance from Merlot-driven wines on the right bank, and power from Cabernet-driven wines on the left. Australia is all about big, wild, expressive fruit in Shiraz. Oregon produces light, bright, Pinot Noir, Argentina creates rich, opulent Malbec, New Zealand their Sauvignon Blancs, etc.

In every country the wines express their overriding cultural perspective, which makes the wines, often right down to the main varietal, one dimensional. An 86-rated $9 wine is simply a younger, more approachable version of the 93-rated more mature complex versions of the same basic wine (with, unfortunately, less well done versions of the same basic style making up the less desired wines from any given region).

South Africa’s wines are also reflective of their country. However, it just so happens that South Africa is the “Rainbow Nation.” Answering a question about a single definition of SA wines is like asking any other question about SA:

What are the beaches like in a country with one continuous shoreline? Well, it depends on whether you mean the ones along the tropical Indian Ocean, the cool Atlantic Ocean, or the little area where the two oceans meet. What’s the vegetation like? Well, there are more plant varieties on top of Cape Town’s small, but iconic Table Mountain than in the entire UK, so it’s quite diverse even without considering the other 99.9999% of the country.

Customs and traditions? It depends on which tribe you are discussing, or whether Dutch or English or French or Malay, all of which have been here for hundreds of years and more. Even how to ask the question is a question, as the Rainbow Nation has eleven official languages. The national anthem is sung in four different languages.

You’ll find wines of almost every style, most varietals, and an unbelievable array of flavors and experiences. The South African wine experience can’t be easily described. If there was a single nation from which you had to choose to drink every wine you drank the rest of your life, you’d likely want to pick South Africa, as you will get almost any experience you want, and some you didn’t know even existed.

It is extraordinarily exciting. I suppose it is fitting that any wine poured out from the cradle of mankind should reflect the complexity and diversity of mankind.

But there is more. Arguably, South Africa’s most compelling cultural element is their progressive foresight – maybe it is because the past has been full of turmoil and the present not good enough for too many residents. But rather than give into that, they positively look forward and work toward new ideas of what is possible, while still holding onto their best traditions. This includes not just the wines, but how they are made. Wineries here have quickly become among the most progressive of any industry anywhere in the world.

These amazing wines are being made in incredibly interesting and valuable ways that give a new dimension to the idea of quality wine – not just what is in the bottle, but how it is made. The next post will include stories about some of the amazing people that are making a greater society and world by the way they are making their great wines.