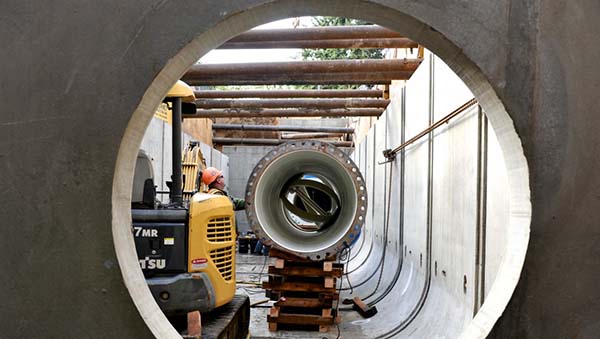 LucidEnergy, a Portland, Oregon-based startup that launched in 2007, has devised a system to get hydroelectric power from city water supply pipes. A pilot project in Riverside, California is in operation and now a full scale project is beginning with the city of Portland, Oregon.

Gregg Semler, president and CEO of LucidEnergy, said his team originally was looking for ways to capture energy from streams. But they soon realized it is difficult to predict the flow of a stream and generating hydropower could be environmentally degrading.

Water pipes don’t present any concerns abut the  environment and they have a fairly consistent flow of energy. “What’s really interesting about Lucid is this is a new source of energy that’s never really been tapped into before,” Semler said. “You take the best of hydroelectricity and put it in the pipe.”

Even in drought conditions, such as California is experiencing now, delivery of drinking water in city water systems remains relatively constant. “We are less vulnerable to variations in the ability to generate this type of hydropower than we are with projects with large dams that need to be full,” says Laura Wisland, senior energy analyst for the Union of Concerned Scientists. “I live in California, and we’re having a drought, and our ability to develop hydropower is much more limited than it has been in the past. I don’t think you’d see the same level of variability with this type of hydro power; there’s a more constant supply of power.”

LucidEnergy tested out the project in Riverside with funding from the Department of Energy. Semler said he targeted Riverside because he knew the city was “really progressive in terms of energy efficiency. We went to them, and they liked the idea. It was a relationship right off the bat,” he said. In Riverside, the electricity generated from the pipes is used to power street lights. The Portland project is much larger and is expected to produce 1,100 megawatt-hours of electricity a year. That’s enough for about 150 homes.

The system is installed in 50 feet of Portland water pipes, in sections where the water flows downward due to gravity. There are four sections of pipe, and each has a generator on top and a 42-inch turbine that spins as the water flows inside. According to the company, up to four units of the so-called LucidPipe can be installed “in a standard 40-foot” section of water pipe, and one mile of 42-inch diameter pipeline has the potential to produce more than 3 megawatts of electricity
In Portland, the turbines were installed by replacing a section of existing pipe with Lucid’s pipe, and bolting that new pipe to the existing water system in a process “sort of like Legos,” Semler said. But he also said there is a market for the technology in cities that are building new water networks where new sections of pipe could incorporate Lucid technology, according to Think Progress.

Many cities around the world are dealing with aging infrastructure and facing questions about how to replace it, said Amy Nagy, business development coordinator at the Portland Development Commission, which worked with Lucid to get the project off the ground in Portland. As cities go through and make improvements to their infrastructure, she said, they should be looking into whether they could get a dual purpose out of it. “Water pipes deliver clean water, and LucidPipe adds an additional benefit of clean energy production, and producing revenue that the city can go back and reinvest,” she said.

Semler is already looking at expanding the system to other cities. Johannesburg, South Africa announced earlier this year that it would be employing the technology in its water system. And Semler said he’s gotten interest from cities in China, Brazil, Canada, and Mexico. A city interested in LucidPipe must first agree to adopt the system, and then go about securing private capital. Portland’s project cost about $1.7 million, which was paid for by private investors. It’s expected to produce $2 million worth of energy over 20 years. The revenue generated from the energy goes partly to Portland, partly to Lucid, and partly to the third-party investor. Those private investor own the project in Portland, Semler said, so the system works similarly to solar panel leasing.

“The challenge in getting cities to agree to the project,” Semler says. “A lot of cities don’t have the capital to put in pipelines. Mostly what cities do is try to keep infrastructure viable. We see LucidPipe as a tool that water agencies can use to bring private capital into building out new water infrastructure projects, or to reduce operating costs,” he said. “There’s been a lot of investment over the last 10 years in solar, wind, and biogas — we see same thing happening with our product.”

“Hydropower is an extremely important part of our existing electricity portfolio and will continue to be so,” Wisland said. “Most people think the era of large dam building in the U.S. is over — we really do need to be turning our efforts over to ways to improving efficiency and finding more creative, non-traditional ways to generate hydropower electricity. As we think about reducing emissions in electricity sector, we can’t take hydro off the table.”