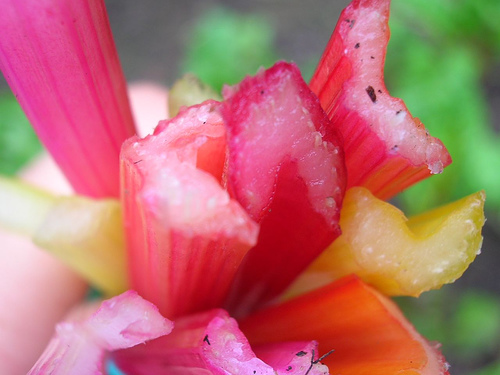 We’re in full swing with the growing season in the mid-Atlantic region.  I certainly enjoy all the fresh produce spilling out of my garden, but none tickle my taste buds quite so much as Swiss chard and sorrel.  For those of you not familiar with these delightful greens, here’s a little primer that should get you well on your way to enjoying both!

Unless you’ve grown up in the South or with a southern cook, you probably haven’t been exposed to a lot of cooked greens in your diet.  Swiss chard is the superstar among the greens family that includes kale, spinach, beets and collards.  It literally is off the chart in Vitamin K (great for your bones) and Vitamin A (good for vision and warding off cancer).   In addition to that, it’s got loads of fiber, iron, potassium, magnesium and even some calcium.  All in a mere 35 calories per cooked cup!  Pretty impressive, eh?

I know what you’re thinking though… how does it taste?  Surely something so healthy is going to be gross.  Nope.  It’s quite tasty and easily added to a great number of dishes.  Two of the most common ways of preparing Swiss chard are sautéing (as we’ll be doing with today’s recipe) and using it in soups.  You can also throw it into just about any stir fry and any baked dish that might normally call for spinach (such as a quiche or lasagna).  It’s great over pasta, rice or spelt, and it’s flavor, while a tad bitter, melds nicely with just about anything.  It also retains a nice bright color after being cooked so for once your kids might not think the green stuff on their plate is slime. When selecting Swiss chard, look for perky full bright green leaves and flexible (not too stiff, not too wilted) stems.  The smaller leaves will cook faster but become next to nothing after a few minutes in the pan.  Larger leaves will hold up more in the pan but will take longer to cook and sometimes be a bit chewier.  I like to aim somewhere in the middle for leaves that are about the size of my outstretched hand or a little bigger.

Sorrel’s a little funny.  It started out as a rather common plant growing in many European pastures.  Cows are quite fond of it.  It seems that peasants took to collecting it for salads and then eventually it made its way into French cuisine and now it’s considered rather gourmet. With a tangy, bright flavor, sorrel is a favorite in soups and sauces, particularly those that are cream based.  Due to its intense flavor, it has the unusual designation of being both an herb and a green (generally, plants harvested for their leaves are considered one or the other).    I can’t vouch for this myself, but it’s supposed to be excellent with lamb.  I personally most enjoy it in pesto or quiche.

It is very high in Vitamin C and A, which is why it was used to prevent scurvy back in the day.  It was also ground into a paste to use as an antiseptic on the skin.  It was also used in folk medicine as a diuretic so don’t eat too much of it!

Mince the garlic and shallot.  Removing the stems, roughly chopped the sorrel.  For the Swiss chard, if you are using larger leaves, cut around the main vein in the center and then remove the tough stem.  If you have really young/small leaves, you do not need to remove the vein.  Roughly chop the Swiss chard.

Place two tablespoons of good extra virgin olive oil in a skillet.  Add shallot and garlic and sauté until golden.   Add the chopped greens and stir briefly to coat.  Sprinkle with salt and pepper and stir again.  Add half cup of stock and reduce heat to low.  Allow greens to simmer until most of liquid is absorbed and greens are tender.  Add additional salt and pepper as needed.

To plate up, mound up spelt and grate some cheese over it.  Then mound the greens on top and grate some more cheese.  Serve with sliced tomatoes or other fresh seasonal vegetable on the side.