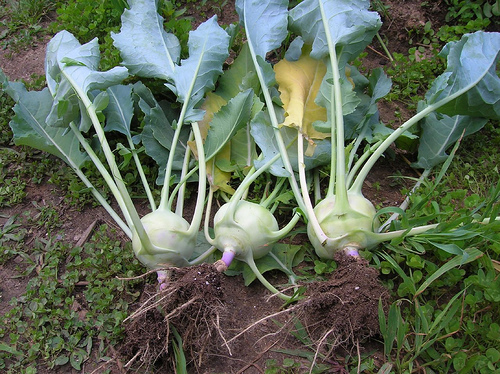 Kohlrabi season is upon us!  Rejoice and partake! And it looks like I’m not the only one finding locally grown kohlrabi in the kitchen.  I am ridiculously fond of kohlrabi, perhaps somewhat in part due to its alien appearance.  It’s crisp and refreshing when sliced thin and eaten raw or grated into a slaw, but I actually like it even better when sauteed.  It releases its juices and becomes almost buttery in texture.

As for the squash, it’s not quite here yet in the Northeast so if you don’t have it locally grown, just use the kohlrabi by itself or add another in-season vegetable.  At the time I created this recipe, I was desperate to use up as much squash as possible.  I figure I’ll give you a head start with ideas for this summer’s onslaught!

I often putz around in the kitchen, twisting perfectly normal recipes into oddities, much to the ire of my partner, D.  All the poor guy wants is a veggie burger and some stuffing prepared out of a box.   I don’t like things when they’re so simple.   Why not try something new and different, right? This time around, I was inspired by a trip I took to Argentina last year.  On the western side of the country in the city of Mendoza (Argetnina’s equivalent of Napa Valley), I consumed (voraciously, I might add) the most delicious and addicting corn and red pepper empanadas.  I recreated them at home, of course, but quickly turned to this combination of kohlrabi and squash once I got the knack of making empanadas down.   It’s an interesting fusion of Indian spices tucked into a half moon of  flaky crust.

You can certainly make your own crust especially designed for empanadas.  I’ll be honest though – I usually cheat as this recipe is a bit time consuming as it is.  The pre-made pie crust available at the store works just fine in a pinch. In a medium skillet, heat oil and butter over medium heat.  Add garlic and ginger to brown.  Add kohlrabi cubes, a pinch of salt and some pepper. Toss well and cook 3 or 4 minutes until kohlrabi are softening a bit.  Add squash cubes and continue to cook for 4 more minutes.  Add scallions, nutmeg and another pinch of salt and pepper.  Mix well and cook for one minute before removing from heat.  Set mixture to this side to cool.

Roll out dough to be a little thinner than pie crust typically is.  If you are using pre-made crust from the store, run your rolling pin over it once or twice.   Using a cereal bowl or large circular cookie cutter, cut out 6 inch-ish circles from the dough.  It should yield about 15, give or take depending on your cutter and dough thickness.

Pre-heat oven to 425 F and line a cookie sheet with parchment paper.   Prepare egg wash by beating egg with a teaspoon of water and set to the side along with a small bowl of water.

To make the empanadas, spoon one tablespoon of kohlrabi and squash mixture into the center of a circle of dough.   (It’s better to have less filling than too much or the empanadas won’t hold together. Feel out the right ratio that allows you to close off the dough without any filling popping out.)   Dip your finger in the bowl of water and run it around the outside edge of the dough.  Fold dough over the filling to create a half circle.  Press down edges.  Carefully pick up the dough pocket and pinch edges (see photo) to seal them tightly.  A fork can also be used to crimp the edges if you want a less tedious method.

Repeat above process to finish all the empanadas, laying them on the lined cookie sheet when done.  With a fork, prick the tops once and brush with egg wash.   Bake for 8 minutes and turn over.  Bake another 5 to 7 minutes until deep golden brown and flaky.  Best served straight from the oven.

* Try this recipe for true empanada dough at some point, if you’re so inclined.

**Also, I’m sure you could add chicken to this recipe and it’d be quite tasty.  In fact, you could just serve the filling on its own for a quick side dish when you’re too short on time to make the empanadas.