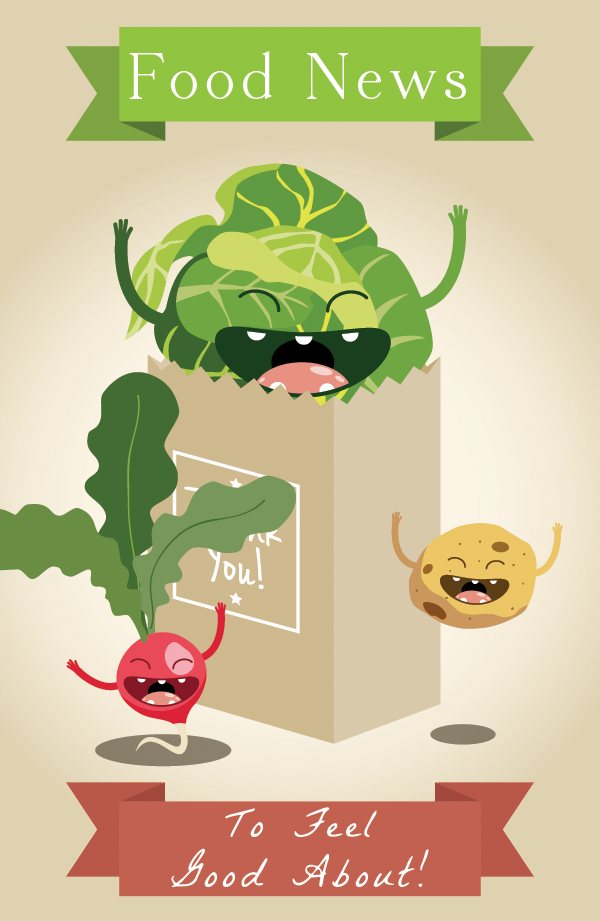 There’s a lot wrong with our food system, but things are beginning to get better. Here’s some recent food news that you can feel good about!

There has been a slew of food news lately that makes me feel pretty darn convinced that big changes are afoot in our food system. Thanks to growing consumer awareness, activist campaigns, and pushback from social media and blogger activists like Robyn O’Brien and Michael Pollan, we’re building momentum toward a better food system. This is good news all around, and I think it shows the tide is turning toward a more sustainable food system.

Food Waste Gets the Boot

Not only was 2016 declared the Year of Pulses by the UN FAO a few weeks ago, but there are many other good food trends on the horizon. Two of the trends that seem to be on everyone’s radar are embracing ‘ugly foods’ and reducing food waste, which definitely go hand-in-hand.

The ugly foods movement helps make farms more profitable, helps consumers stop expecting perfect produce, and in turn helps reduce food waste at the farm and at the grocery store levels. We can reduce food waste at every step of the food chain, and we’re seeing consumers, businesses, and even the government getting on board. The USDA has created a set of formal waste reduction goals.

This year, the USDA released updated the US Dietary Guidelines. The new guidelines have their problems, but there are a couple of areas where they get it right.

Even though it’s buried in the text, the 2016 US Dietary Guidelines have pushed for a decrease in sugary drinks to less than 10% of daily calories for the first time. Food Politics author and policy wonk Marion Nestle reviews the 2015 Guidelines (get the PDF version here) and notes that throughout the text, water is preferred to sugar-sweetened beverages and artificially sweetened beverages.

Also for the first time ever, the Dietary Guidelines attempt to make a connection between the foods we eat as a pattern, rather than looking at nutrients in isolation. The guidelines this year also recommend a reduction in high-protein meat and animal foods, but don’t mention processed foods. Read Nestle’s review of the guidelines here. Read more about how too much protein can be harmful to our health here.

A few months ago the World Health Organization stunned the world with their announcement that processed meats are definitively linked to certain types of cancer and are as dangerous as cigarettes. They recommended that people avoid processed meats like bacon entirely.

Bacon-lovers all over the place freaked out, but the news rattled the food world. I’ve not yet seen any data showing bacon sales are down, but I’m anxiously awaiting. Read more about the WHO bacon announcement here.

NPR reported on the death of the diet food trend last week, and I think this too is a good sign that we’re shifting toward a focus on real food. Research showed that 77 percent of the consumers surveyed said that diet products are not as healthy as they claim to be, and 61 percent said most diets are not actually healthy.

Companies like Weight Watches, Lean Cuisine and other ‘diet’ brands are losing sales, because consumers want to focus on healthy eating as a lifestyle, not a crash diet. In the NPR article, market analyst R.J. Hottovy stated that, “Consumers are looking for a more holistic, more health and wellness approach. The shift in food trends is toward fresher and more natural ingredients.” And who can disagree with that?

Part of the reason milk sales have declined is due to an increase in sugar-based soda sales and lack of innovation to appeal to younger markets. Mother Jones reports that dairy companies spent nearly $63 million on federal lobbying and gave $24 million to candidates between 2004 and 2014 to encourage consumer to drink more milk, but it doesn’t seem to be working.

The newest marketing campaigns for the dairy industry are trying to position milk as a ‘sports recovery drink,’ which is a big problem for lots of reasons that I wrote about here. But perhaps more importantly, more research is surfacing showing the milk is not good for adults, because milk consumption is bad for our bones, hearth health, and general wellness. As consumers become more savvy about these health concerns, I think we’ll continue to see a decrease in dairy.

At the end of December, the Gazette reported that Monsanto will cancel plans for a $90 million plant in Iowa, along with the loss of 47 full-time jobs and 800 seasonal positions. In January it was reported that the company is facing a 34% decrease in earnings credited to a year of protests over GMO foods and record harvests of soy and corn driving prices down globally. Bad news for big business, good news for biodiversity.

GMO Labeling Gets a New Ally

Citing the need for better transparency, Campbell’s announced last week that they are going to start labeling their genetically modified ingredients. They have also committed to removing themselves from anti-labeling movements and supporting federal labeling initiatives. Read more about the Campbell’s GMO announcement here.

General Mills just announced the culmination of a a four-year plan to remove 75% of artificial colors and flavors from their cereals. These foods are not quite what I’d consider a healthy breakfast, but these steps show the companies are listening to consumers and making the changes we want to see for a better food system.

This trend continues in fast food operations: Subway is dropping artificial ingredients, and Wendy’s just announced a vegan burger. Who knows what else 2016 has in store for us!