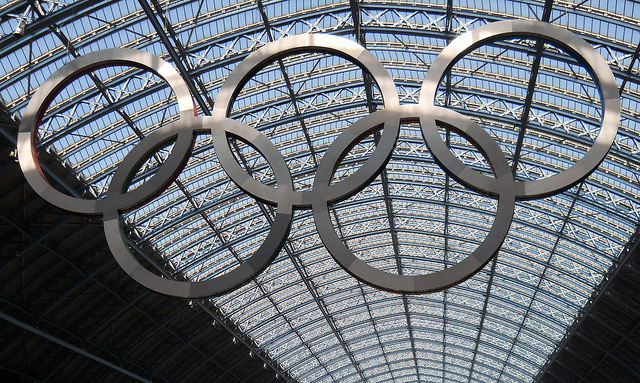 Coca Cola is a major sponsor in this year’s summer Olympics in London, but soft drinks and wasteful bottled water aren’t the only options for thirsty attendees and athletes.

Thanks to forward-thinking Olympic spokesperson Tom Brake insisted back in 2008 that the London Olympics would make tap water readily available, so that folks wouldn’t have to rely on bottled water. In a 2008 press release about the policy, Brake said:

Everyone wants the 2012 Games to be the most sustainable on record. That must mean free non-bottled water for all visitors to the Games. Otherwise the discarded bottles will stretch to the Moon and back. And there would be a great health spin-off from increased water consumption and a reduction in fizzy drink consumption as well.

The organizers put designated filling stations for your water bottle throughout the London Olympic Park.

When you consider the thousands of people that flooded into London for the 2012 Olympic games, ready access to tap water could have a huge environmental impact. Think of how many single-serving plastic bottles they’re diverting from the landfill by making it easy for everyone to fill up their reusable bottles instead.

For security reasons you can’t bring a full bottle of water into the Games if it’s over 3.4 ounces, but you can bring an empty and fill it up for free all day long.

A couple of commenters here mentioned that the stations were hard to find, and Dave Beynon – one of the commenters to my follow-up post on the bottled water refill stations – said that he found the stations. I asked him where they were, and he said:

Hi Becky – yes they were next to every toilet area – not very clearly signposted but, if you were looking, they were quite obvious. So, sustainable yes, but perhaps with a bias towards vendor profits…

But, hey, the whole thing was free and only food/drink were (over)charged for.

Thanks so much, Dave! I hope this helps anyone attending the Games that doesn’t want to drink bottled water.

Leave a Reply to Did you have to buy bottled water at the London Olympics? | Eat Drink Better Cancel reply