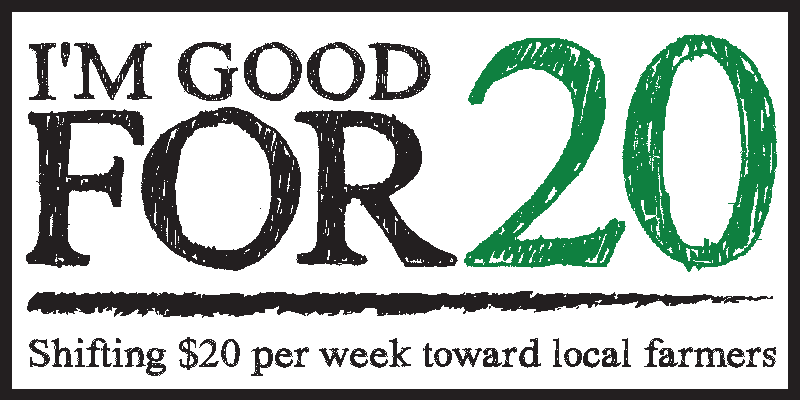 It’s farmers market season here in the South. Daffodils are a-bloomin’, trees a-flowerin’, and I’m eager to start hitting the markets for local, seasonal produce and eggs from happy chickens. Sure, it’s easier to hit my corner grocery store. But the food tastes worse, costs more (if not in dollars and cents, in taste and nutrition), and frankly doesn’t have the soul you find in food grown nearby and harvested by your neighbors who package it up for you with fresh dirt still under their fingernails. Many farmers have also had a tough winter — it’s so important that we support them as spring is upon us.

Which is why I decided to take an oath:

I, Mary
Do hereby promise
As long as I need food to survive
To allocate at least $20
Of my weekly grocery spending
To a direct-to-customer source
Such as a farm stand, farmers market, or CSA.

Welcome to a movement named “Good For 20” started by a Morristown, NJ couple. They want to know their well-earned incomes stay local and support their farming community. And they want us to do the same as they aim to “inspire people to reallocate a portion of their food spending to a direct source for fresh local food.”

Looking at their web site, the movement appears to be fairly small. So what do you say we help it grow? Take the oath, share via social media, and let’s make it happen. As posted on their web site: “Small commitments can lead to big change.”

Won’t you join me?