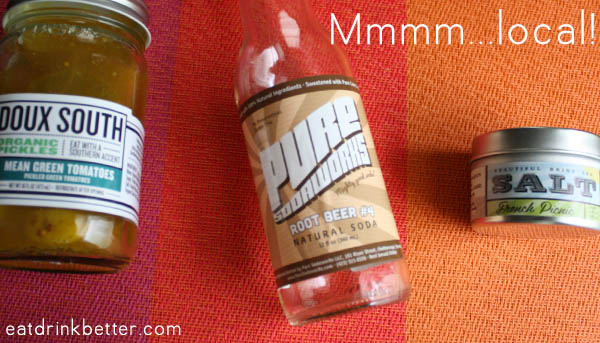 The Indie Craft Experience (ICE) is an Atlanta craft market and not somewhere I expect to run into a lot of fodder for this site. I love shopping for handmade goodies, don’t get me wrong, but I’m there for the cute crafts, not for the food. You can imagine my delight when I rounded a corner and came upon an entire row of delicious local food!

Disclosure: the ladies who organize ICE are good friends of mine. When I talked to one of them later about the food, she laughed and said she had a feeling that I would freak out. She was correct!

My little local food haul is pictured above. Here’s a bit about each one (from left to right):

Atlanta-based Chef Nick Melvin makes organic pickles that I can only describe as freaking delicious. I sampled the Drunken Tomatoes (pickled with wine!) and the Mean Green Tomatoes. The drunken pickles were amazing, but I had visions of stacking those pickled tomatoes onto a glorious sandwich, so I went with them instead. I have no self control around pickles, though, so I accidentally ate them all straight out of the jar in the days after the show. D’oh! I guess I’ll have to get more to make that sandwich idea happen.

If you’re not in Atlanta, check out the Doux South website – they sell their pickles online!

I am not big on sodapop, but I do sometimes like treating myself to an extra special bubbly beverage. I’d heard folks talking about Pure Sodaworks before even finding their booth. They have some really interesting flavors like apple pie and hibiscus lemon, but I opted for a good ol’ root beer. It was like no root beer I have ever tasted, and I wish I had another one right this minute!

The Chattanooga-based trio sells their soda in some stores, but you can also find them online.

I am a long-time fan of the flavored sea salts by Beautiful Briny Sea. In fact, I talk about them so much that when I said hello to the owner at the show, she gave me the French Picnic salt pictured above as a gift! Her salts make everything you cook 1000 times more delicious, no exaggeration. She hand-mixes sea salt with herbs and spices to create blends like Santa Salt (rosemary and pink peppercorn) and Magic Unicorn (celery seed, garlic, rosemary, paprika, and lemon powder).

You can find her salts at The Beehive and other shops here in Atlanta or online at Fab.com.

OK, this wasn’t part of the row of food vendors, but this awesome hot dog truck was set up by the bar. As it should be. They offered a Tofurkey veggie dog, and their menu for the day included a collaboration that knocked my socks off. It was:

It was probably the best veggie dog that I’ve ever eaten. And I am a pretty big fan of a veggie dog! Doggy Dogg sets up at local farmer’s markets, so follow them on Facebook or Twitter to see where they’ll be next!

Have you guys run across any awesome local food vendors in unexpected places? Show off the local eats from your town in the comments!