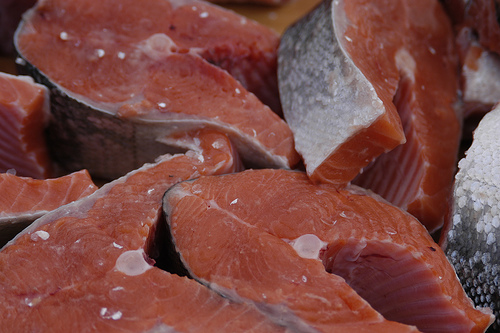 In mid-July, several representatives and senators wrote letters to the FDA asking the agency not to approve genetically modified salmon. The letters cite economic and environmental concerns as reasons for their opposition.

The FDA has been moving ahead on plans to approve AquaBounty’s AquAdvantage genetically modified salmon for farming, relying on assurances from the company that their GM salmon poses no risk to the environment or to human health.

Legislators from states with salmon fisheries are the leading voices of opposition to the approval of GM salmon. One concern is with the escape of the GM salmon from pens and subsequent interbreeding with wild salmon, producing fish that eat more and make more attractive breeding partners, but ultimately cannot survive in the wild as well.

A second concern is with the environmental impacts of farming. The AquAdvantage salmon eats significantly more than the wild salmon. The fish farmers will need to harvest the same small fish the wild salmon depends on in order to care for the GM salmon. Less food for the wild salmon will reduce their survival chances and will impact the salmon fisheries already in place.