Catholic Healthcare West (CHW) is a San Francisco, CA based system of 41 hospitals and medical centers in California, Nevada, and Arizona.

This national leading Catholic hospital system is now leading the nation in more ways than one.

CHW has made the decision to use food suppliers who have agreed to seek out alternatives to foods made with genetically engineered (GE) ingredients or cloned animals.

Included in CHW’s new food policy is GE sugar beets, which just recently have been introduced into the nation’s food supply, as well as meat and dairy products from cloned animals, which the FDA has decided to allow.

According to the Organic Consumers Association,

The CHW position was developed in recognition of the serious health and environmental concerns these technologies raise and the threat they pose to healthier and more sustainable food production options.  Among the concerns CHW is raising about GE and cloned foods are genetic contamination, increased pesticide use, animal cruelty, and the deep ethical and moral issues associated with these untested new technologies.

Hopefully because of CHW making this monumental decision, more companies such as other health care facilities, and even schools will follow their lead to avoid these potentially harmful ingredients. 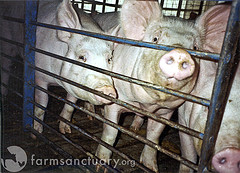 Amy is a vegan, working mother of one with a degree in Nutrition Education. She has had a longtime interest in natural health, animal rights, human rights, and environmental issues. She shares her Midwestern home with her husband and son, as well as with what many would consider to be a lot of pets.