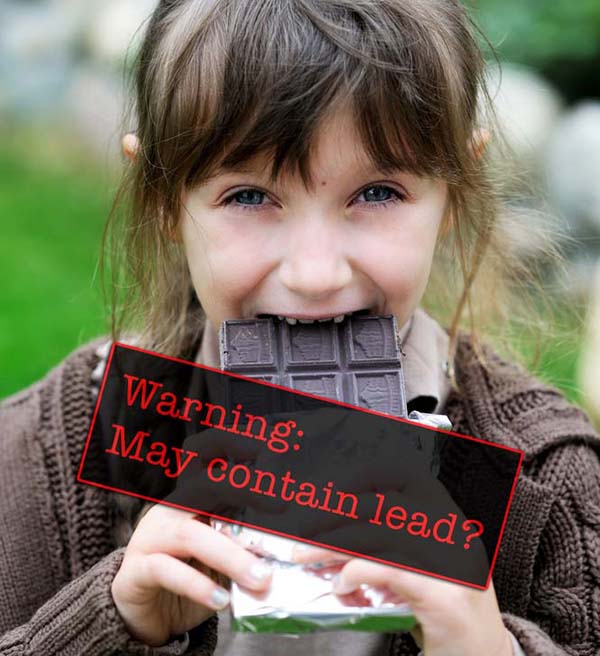 by As You Sow, republished with permission from The Green Divas

You might expect to see cocoa, sugar, cream, and even soy in your chocolate…but lead?!

Heavy metals, such as LEAD are being discovered in all kinds of chocolate, even organic chocolate! WTF? Green Diva Lynn does a sad and scary GD myEARTH360 report for those of us addicted to chocolate. Listen then read on for an informative article from As You So. ~ Ed.

Responding to published research showing high levels of heavy metals in commonly eaten food items, As You Sow began extensive independent laboratory testing of 42 chocolate products for lead and cadmium. We found that 26 of the chocolate products (~62 percent) contain lead and/or cadmium at levels in which one serving exceeds the California safe harbor level for reproductive harm.

As You Sow filed notices with 16 manufacturers, including See’s, Mars, Hershey, Lindt, Godiva, Whole Foods, and others, for failing to provide required warnings to consumers that their chocolate products contain lead, cadmium, or both.

See the products we tested in the tables below.

No level of lead is safe for children.

Lead exposure has been a significant public health issue for decades and is associated with neurological impairment, such as learning disabilities and lower IQ, even at low levels. “No amount of lead ingestion is ‘safe’ for children,” states Sean Palfrey, MD, a pediatrician and professor of Pediatrics and Public Health at Boston University School of Medicine. “Pregnant women and young children with developing brains in particular should avoid any ingestion of lead.”

Cadmium is also known to cause reproductive harm.

Chronic exposure to cadmium has been to kidney, liver, and bone damage in humans. Children are more susceptible to exposure effects from low doses of cadmium over time. Companies are not doing enough to keep their products safe and below California’s safe harbor level for reproductive harm for these toxic heavy metals.

California law ensures consumers receive warnings before they are harmed.

To protect consumers, companies should take immediate steps to remove these toxic heavy metals from their products or, at a minimum, to warn according to the California’s Safe Drinking Water and Toxic Enforcement Act of 1986. If the heavy metals are not removed, people need to be informed so they can protect themselves and their families.

Consumers’ input is important to food manufacturers and we, as consumers, should make companies aware that we take this issue seriously. Investors should also consider potential risk if they own shares of these companies. Read our press release here. Green Diva Meg and I wanted to know how in the world lead and cadmium end up in chocolate, even when it’s organic.

Related: How much lead in baby food is too much?

Eleanne van Vliet, MPH, Director of Toxic Chemicals Research at As You Sow provided an answer.

Possible sources of lead and/or cadmium in chocolate…

From our research, we found there are generally three possible source(s) of lead and/or cadmium contamination as follows:

Lead and cadmium is released into the atmosphere through manmade industrial processes such as melting, smelting, fossil fuel burning/coal-fired power plants, waste incineration, leaded gasoline, etc. and this leads to aerial deposition onto soil of lead/cadmium where it remains for decades due to the persistence of these heavy metals.

Direct applications of lead/cadmium contaminated pesticides, phosphate fertilizer (contains cadmium), sewage sludge deposition, and contaminated water supply (irrigation) are all manmade applications that can be easily avoided and remediated through improved management of suppliers by the manufacturers.

Contamination can occur during the manufacturing process. For example, a study by researchers from the University of California, Santa Cruz (Rankin et al 2005, EHP), analyzed cocoa beans, cocoa bean shells, and soils from Nigeria, a key source of cocoa sold in the U.S. The researchers then compared the concentrations in the beans, shells, and soil to manufactured chocolate and cocoa products, including baking chocolate, candy, and pudding, sold in the U.S. Lead levels in the unprocessed beans were very low—less than 0.5 ng/g, while levels in the finished products ranged as high as 230 ng/g for manufactured cocoa.

In the same study, the researchers considered the geographic source of the lead by comparing the isotopic composition of the lead in the raw cocoa, to the lead in the manufactured products, to that in the raw beans, shells and soil. The finished products contained lead with a wide variety of isotopes, whereas the lead in the unprocessed beans had only a narrow range of lead isotopes. And even as to those, their only apparent connection to Nigeria was their consistency with isotopes found in Nigerian leaded gasoline. This finding can lead to only one conclusion—that the lead in the manufactured cocoa products came from human activity before, during, or after the production chain—which under the Proposition 65 regulation would not be “naturally occurring.”

In another study (Yanus et al 2014, Talanta), authors measured metal content in cocoa beans (shell and core), cocoa powder, and cocoa butter using ICP-MS (inductively coupled plasma mass spectrometry). Cocoa powder and butter are produced through the processing of the cocoa bean core after the bean shell has been removed. The study found that the concentrations of lead, as well as other metals including cadmium, were higher in the cocoa powder and butter than the lead concentrations found in the bean core, underscoring that lead contamination is introduced “namely during the manufacturing of cocoa and chocolate products.”

We believe that lead/cadmium contamination can be controlled/remediated through a thorough assessment by the companies of their suppliers, so they can identify the source(s) of heavy metal contamination and clean the supply chain and manufacturing processes.

Only manufactures can identify the source(s) when working together with suppliers; and we want to urge chocolate manufacturers to come together and address this global problem by collaborating with their suppliers to identify the source(s) of these metals so they can effectively remediate to decrease—or ideally remove altogether—the cadmium and lead in chocolate products. And provide consumers with only one choice: a healthy product free of toxic heavy metals.

…we are continuing to test chocolate products. Our California “60-day notice filings” to date can be found at the URL’s below.

And what about responses from companies like Trader Joes?

~ Eleanne van Vliet, MPH, Director of Toxic Chemicals Research at As You Sow

I have been enjoying the guilty pleasure of one to two squares of Trader Joe’s Dark Chocolate every single day for the last few years. No, it’s not organic or Fair Trade. Yes, I am an imperfect Green Diva who has been inexcusably lazy about finding a Fair Trade/Organic chocolate bar (in my somewhat lame defense…I mix Fair Trade organic raw chocolate powder into my matcha tea daily).

Trader Joe’s chocolate is on the above list of brands containing unsafe levels of lead and/or cadmium—a cruel form of punishment being inflicted on me from the green gods.

On my last shopping trip to Trader Joe’s I noticed their pound of dark chocolate still on the shelves and asked a staff member about it. He told me that they had talked about this very study in their crew meeting and that the tests were not valid. Hmmm. What’s a Green Diva to do? Sadly, even with this knowledge, I continued to eat my Trader Joe’s chocolate to the bitter end and have been going without chocolate for days now.

I’m going to search for Endangered Species Chocolate, which is on the “no warning required” list, and hope that it’s delicious and not expensive. I may have to reduce my dark chocolate intake, which will be sad but possibly a sacrifice I need to make.