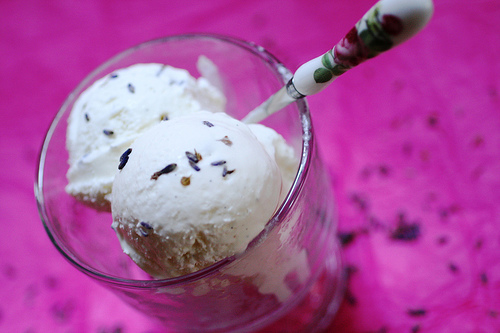 I’m really putting my lavender plants to work already this summer.  First a bubbly lavender lemonade, and now lavender scented ice cream!  I’m running to catch up to the bandwagon here, flagging it down like a speeding city bus.   Many folks have long been touting how sublime the marriage of lavender and cream is.  But I hadn’t bought into it until this batch of ice cream. I looked around for a recipe that called for fresh flowers, not the dried, hoping it would impart a more floral scent/flavor.  This recipe popped up on my internet search, but I was a little hesitant when I saw the rest of the ingredient list.  No eggs.  It’s hard to get a rich creamy ice cream without a custard base.  I mulled it over and decided it was worth a shot.  Since there are no eggs, this recipe was bound to be far easier than some out there so it wouldn’t be any great loss if it was just another flop.

To cut any suspense, I’ll tell you right away that this ice cream is superbly rich and creamy, with a lighter-than-air floral flavor that co-mingles perfectly with the sweetness of the vanilla.  Even with the use of one percent milk and some sugar substitute, it stood up to even some of the best Italian gelatos I’d sampled on the streets of Florence back in the day.  Adding to my delight, even with the lack of eggs that usually help to stabilize the creaminess for longer-lasting ice cream, the next day the scoops were just as smooth and rich. A quick word of advice about the lavender:  I highly recommend using a variety of angustafolia lavender.  I grow and use Hidcote myself.  Usually the darker purple the buds are, the better flavor it will have.

Gently heat milk, lavender and the vanilla bean until warm, but not boiling.  Using a fine mesh strainer, strain the milk into a bowl and stire in the salt, sugar and Splenda while still warm.  Stir in the cream and chill the  mixture for at least 2 hours until cold.