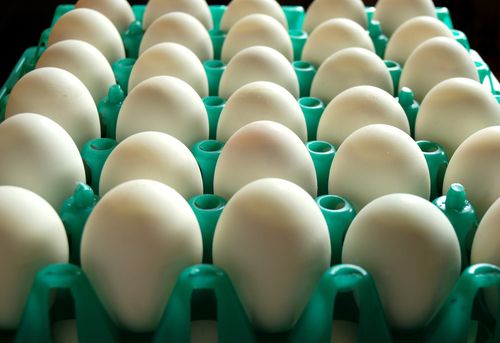 The video taken by an undercover investigator (below) shows hens packed in cages so close they can barely move. Dead birds are left in cages so long that the bodies are mummified and stuck to the cages. Dead flies cover the walkways so thickly, the investigator said it felt like walking on Rice Krispies.

Oddly, Kreider Farms issued a statement that doesn’t really defend them against the allegations.  The statement says:

“More than 80 percent of our chickens are housed in larger, modern cages.” That leaves only a million birds that could be living in the horrible conditions shown in the video.

“We have no evidence of undercover activity inside our facilities…” Why would there be evidence? It’s not an undercover investigation if it’s announced ahead of time.

“…and there is no evidence that HSUS video footage was taken inside Kreider Farms.” I think this statement bothers me the most. “There is no evidence…”, not “That’s not our barn.” Shouldn’t they know what the inside of their hen house looks like?

You can read the statement in its entirety online.

The Kreider Farms web site has a “chicken cam” which shows birds living in not-as-bad conditions. The cages are clean and the birds are active, but they still look crowded to me.

In the statement, president and CEO Ron Kreider says he supports legislation for the improvement of national egg production standards. He’s probably referring to H.R. 3798, the Egg Products Inspection Act Amendments of 2012.

H.R. 3798 contains several pages of specifications on how much space a hen gets, required enrichment items (perches, etc.), and package labeling. It bans forced molting by denying water or food to the hens.

Also included in the bill is a multi-year phase-in of the requirements and an exemption for people who own less than 3000 hens.  Owners of backyard flocks will not have to provide special enrichment items.

Let your representative know how you feel about protections for egg-laying hens.

While you’re encouraging your representative to protect egg-laying hens on the national level, be sure to check if your state is one of the states passing “ag-gag” bills.

Ag-gag bills prohibit undercover investigations and carry steep penalties for any worker who tells it like it is. They make it illegal to provide proof of allegations of cruelty.

Ag-gag bills don’t protect the good guys – the people who take good care of their livestock. Ag-gag bills only protect factory farms that keep their animals in unsafe and unsanitary conditions.