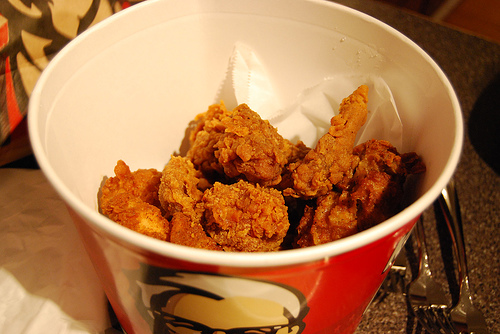 A trio of Anderson, California girls are in hot water with their fast-food employer for dipping themselves into the sink used to clean dishes and taking photos that landed on Myspace.

The photos had been filed under a gallery called “KFC moments.” and showed the girls bathing in the deep commercial sink, posing in their underwear and swimwear. Captions for the photos included “haha KFC showers!” and “haha we turned on the jets.”

One of the girls bathing in the sink at the Anderson Kentucky Fried Chicken posted the photos on the Internet and management learned of them during the dinner rush Tuesday night.

An assistant manager to the restaurant said no manager was on duty when the photos were likely taken and the three girls closed the restaurant themselves. In her more than a year at the store, they haven’t had any incidents similar to this.

“KFC has zero tolerance for violations of our operating standards, and our franchisee has taken immediate action by terminating the employees who were involved,” Rick Maynard, a spokesman for the chain, said in an e-mail to USA Today.

Reactions from locals are consistently of ones disgust, but one has to wonder why they’re not concerned with the cruelty KFC is well known for or how unhealthy the food is.