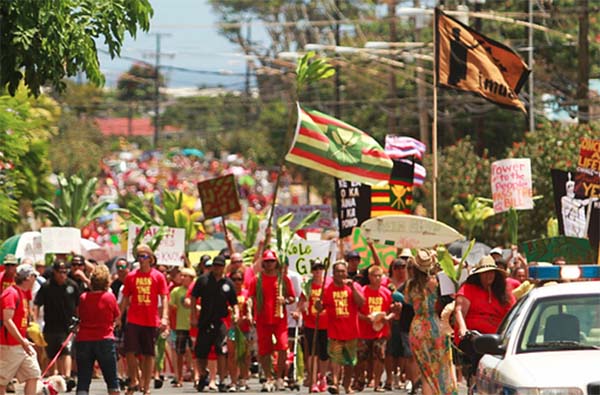 If you’ve been following the fight to limit pesticide testing on Kauai, you’ll be saddened by this piece of Kauai news.

Food Safety News reports that the mayor of Kauai has vetoed the bill:

Mayor Bernard Carvalho, Jr., called the bill “legally flawed,” choosing to veto it despite saying he agreed with the intent behind it.

The Kauai county council voted 6-1 to approve the bill on Oct. 16. With another vote of at least five, the council can override the mayor’s veto.

Meg Pittsley from the group Stop Poisoning Paradise wrote about County Bill 2491 here at Eat Drink Better. She explained that the bill would have “[required] buffer zones to protect sensitive areas (schools, hospitals, waterways, public roadways, etc.) and the completion of an Environment Impact Statement (EIS) to investigate the impact these operations have on Kauai.”

Yep – companies like Dow Chemical, BASF, and Syngenta have been spraying massive amounts of chemical pesticides without completing an Environmental Impact Statement.

While the companies doing this testing are major players in the GMO market, this campaign is not necessarily anti-GMO, but some of the Kauai news stories about this bill are painting it that way. While some groups – like Stop Poisoning Paradise – definitely have a non-GMO message, the concern is about pesticides and how they are impacting human health on Kauai. Especially children’s health. This quote from a Kauai mother that Pittsley shared in her original piece really hits home:

We’re exposed to restricted pesticides through our air, water and  food. My daughters and I have experienced symptoms of asthma, burning in our throat and eyes and unexplained allergies. If this abuse continues, what will be left for the future of our keiki? Why should I leave? I do my best to fulfill my kuleana (responsibilty) as a steward of my ancestral land. No amount of money in this world is worth the health and well being of our ‘ohana and our community.

They mayor presented his veto to the council on November 7th, but they did not vote on whether to override at that time. I’ve been looking for Kauai news updates on when they will hold that vote but haven’t been able to find the date for it. If you know, please comment!

Stop Poisoning Paradise and the residents of Kauai aren’t giving up the fight just yet. Like Food Safety News reported, the council can still override the mayor’s veto. If you live on Kauai, you can show the council that you support Bill 2491 by emailing a message of support to CouncilTestimony@Kauai.gov.