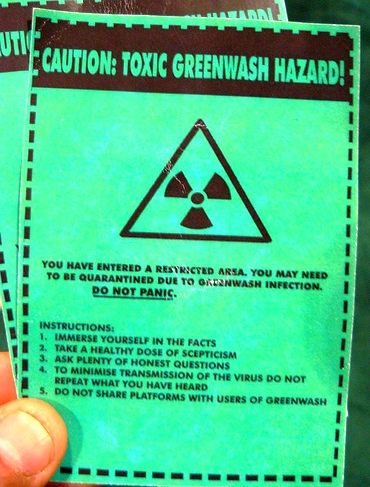 I have two major sustainable cuisine pet peeves; first, I have a love / hate relationship with the word “sustainable”. Yes, I know the name of my cookbook is The Sustainable Kitchen but there is no real definition of the word. Second, culinary greenwashing. The standard definition is:

“making unsubstantiated environmental claims” or “the appearance of cultivating ecological awareness in hopes of getting a higher profile [and eventually money] for whatever they happen to be selling us.”

It’s bad enough when McDonald’s, Subway and Dominos do it. I believe Americans have grown accustomed to and know what it is, industrial-scale spin. But what really gets me is when a local, independent restaurant has the nerve to manipulate us. And per usual, the mainstream press happily goes along with the illusion just because they are “local”.

Across the country, a myriad of restaurants jump on the local and sustainable marketing bandwagon. Just because they tout how they buy an organic carrot from this or that local farm, they must be a restaurant that supports all local products and is a “sustainable” enterprise. When anyone who cares takes two-seconds to look behind the curtain, one finds that they ship-in meat from all over the U.S. or buy from in-state cooperatives that actually source their products from out-of-state. They serve fish from non-sustainable fisheries, actually buy a majority of their produce from non-seasonal, out-of-state suppliers and support foreign artisans over better, local artisan products. Their beverages lists (wine and spirits) show almost no selections from local sources. It’s lazy and worse reprehensible.

As I’ve mentioned before, sustainability is three-prong: environmental, economic and social. As Chris Cosentino, from Incanto Restaurant in SF said, “you can learn more about a chef from what’s in his garbage can than what’s on his plate.” These same restaurants don’t participate in the composting programs, do nothing about green energy, water efficiency and conservation, and do nothing about toxic cleaning and chemical products.

I’ve searched the web. I’ve looked at newspaper archives. I’ve asked friends and restaurateurs from across the country. No one is bring this up to the public. My guess is that they are too afraid of being seen as “anti-sustainable”.

I did find an article from Leslie Brenner of the LA Times wrote Reach for the Green on April 26, 2007 about a just opened restaurant billing itself on an e-mail blast to the media as a “new sustainable restaurant.”

The dining room is, indeed, striking, with great-looking midcentury-esque light fixtures, floor to ceiling wood screens, high-backed leather chairs and raised booths, with high, chocolate-colored leather banquettes… Wait – leather chairs? Leather banquettes? How sustainable is that? I asked one of the server…”It’s sustainable,” he said, laughing. “It sustains for a long time!”

As I later learned, the cobia was flown from Vietnam, the Serrano ham was from Spain (of course), and though there’s perfectly good Wagyu raised in the U.S., [this] was flown in from Australia. John Dory is on the menu too – that’s flown in from New Zealand. Black cod is from Alaska, the lobster’s from Maine. Sustainable? Local?

Worst of all was the cheese selection. Not that the cheeses weren’t good – in fact they were excellent, well-chosen, well-cared for, perfectly ripe. But local? Not on your life. Two were from Spain, one from Italy, six from France. Only one out of 11 was domestic. Last I checked, there was a thriving artisanal cheese-making movement across America.

She finishes the article with, “Some things I can forgive, but one thing I can’t is taking advantage of diners’ sense of environmental consciousness in trying to make a buck.” Doing what you can do on the sustainability front is admirable, claiming more is disgraceful.

For More Information on Greenwashing:
The EnviroMedia Greenwashing Index
Green or Greenwashing? A Guide – Greenopedia
The Six Sins of Greenwash – TerraChoice