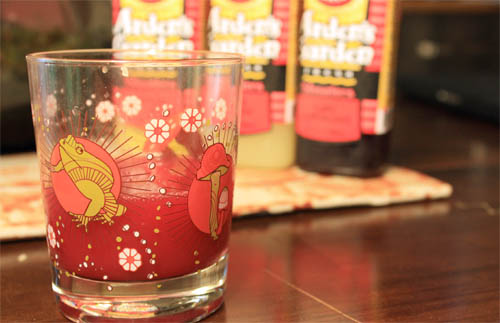 Want a burst of energy without downing an unhealthy energy drink? Try this juice shot combination!

Confession: I’m more of a whole fruits and veggies kind of a gal. I got a fancy pants juicer as a gift once and ended up giving it away, because I just wasn’t making enough juice to justify keeping it around. There’s a local juice shop here in Atlanta that I particularly love visiting: Arden’s Garden. My husband and I used to pop in there for their smoothies until one day a friend was working and offered us a free grand slam.

This wasn’t a Denny’s-style grand slam. At Arden’s Garden, the grand slam consists of 2oz each of unsweetened, 100% wheat grass, lemon, cranberry, and ginger. You do the shots one at a time, and if you ask nicely they’ll give you a pineapple juice shot as a chaser. It’s a lot of tastes happening really quickly, so I definitely recommend the pineapple the first time you try a grand slam.

We were hooked! That series of juice shots left us full of energy, and we started visiting frequently for grand slams.

The other day, my husband, Dave, popped in to get a grand slam, and the fellow behind the counter suggested something new! He mixed up a glass with 2oz each of the cranberry, ginger, and lemon. Dave liked it so much that he picked up a bottle of each to bring home so we could make them here!

The fellow at the juice shop recommended taking it like a very large shot, but I’ve really enjoyed sipping it. The juice is a lovely pink color, and it’s a nice combination of tangy and spicy. If you’re not used to unsweetened juice, you might want to either try to shoot this at first or dilute it with lots of water.

This glass of mixed juices gives me the same burst of energy I get from the grand slam. It’s a different sort of energy than you get from coffee – a bit less jittery and more focused. I definitely recommend giving it a shot – or just taking shots of ginger, cranberry, and lemon juice – if you need a quick pick me up!

So, we know that cherry juice helps with insomnia and this combination seems to have an opposite effect. Are any of you guys into juice shots? I’d love to hear about combos you dig in the comments!

Leave a Reply to Been Juiced at Ardens Cancel reply