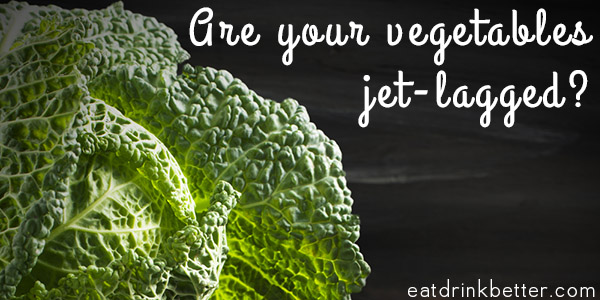 According to new research, plants have circadian rhythms, just like people do, and disrupting them can change their nutrient content.

The term “circadian rhythms” refers to our internal, biological clock that responds to our surroundings, including light and darkness. It’s the light and dark cycle that interested researchers at Rice University. They took a look at how a common sort of cabbage responded to changes in light and dark cycles, and what they found was fascinating.

Kate Prengaman at Ars Technica spoke to Janet Braam about the research, and she explained how the plants adjusted what chemicals they produced and when according to light exposure, explaining that the plant produces “defense hormones” during the times of day when insects are most likely to be around.

Even cooler? The plants even make these adjustments for several days after they’ve been harvested. So, what does it mean?

The hormones – called glucosinates – are among the compounds that make cruciferous vegetables like cabbage help prevent cancer.

The researchers didn’t stop with cabbage, though. They tested zucchini, blueberries, carrots, lettuce, sweet potatoes, and spinach. All of these also responded to changes in their light and dark cycles. That means two things: their nutrient content is most likely also effects, and more study is needed.

While the researchers didn’t suggest this, it makes sense, then that storing veggies near a windowsill that gets good sun during the day might be a good way to maximize their nutrient content. Of course, not all veggies thrive when you store them outside of the fridge, but for hardier veggies like sweet potatoes, it might just be worth doing! Really, this sounds to me like a strong case for growing your own food. What plant is more exposed to natural light and dark cycles than one growing outside in a garden, right?