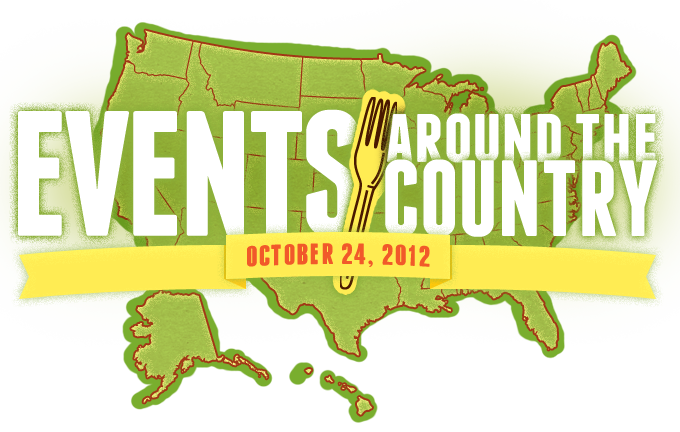 A little less than three months: That’s how long you have to figure out how you will celebrate and support Food Day on October 24, 2012!

Food Day, created by the Center for Science in the Public Interest (CSPI), isn’t a new event — it started on April 17, 1975, when the CSPI tried to piggyback on Earth Day celebrations to bring attention to “rising food prices, the declining quality of the American diet, and the severity of world hunger.” But after running out of money and energy, the event disappeared after 1977, not returning until last year, when Food Day 2.0 hit the calendars on October 24, 2011 with a bang! Last year, the cause inspired eaters to organize more than 2,300 events, touching every state in the country.

Food Day 2011 made a difference in Nebraska.

The Omaha Farmers Market and Gretchen Swanson Center for Nutrition partnered to extend the market by one week in order to celebrate Food Day, and it was attended by 5,000 people. The groups provided 500 certificates for healthy breakfasts for kids, held canning demos, and donated goods for a healthy meal for 400 homeless people.

In New Haven, Connecticut, students from the Yale University campus, the New Haven Food Policy Council, local public schools, and food retailers teamed up for a fabulous Food Day collaboration. October 24 was jam-packed with educational events, including a walking tour of a community garden for elementary school students, a nutrition workshop at the Hill Health Center, an awareness-raising dinner at the Downtown Evening Soup Kitchen, and activities at four WIC clinics.

You may have heard of a flash mob, but a carrotmob? Basically, it’s the opposite of a boycott. Consumers converge on a local food purveyor whose practices they approve of and pledge to buy only from that vendor for a period of time. That’s what food activists in Philadelphia decided to do to celebrate Food Day. Andrew Toy and Patricia Blakeley organized the East Coast’s first carrotmob at Arnett Woodall’s produce store in honor of Food Day, spreading the word via social media that others should patronize the place at a certain time of day and help to reward the owner for selling healthy food in a neighborhood of vendors who mostly sell junk.

This year, Food Day is on October 24, 2012. You can help spread the message and join the celebration in so many ways. Check out the Food Day web site to find an event or organize your own.

How will you make a difference?