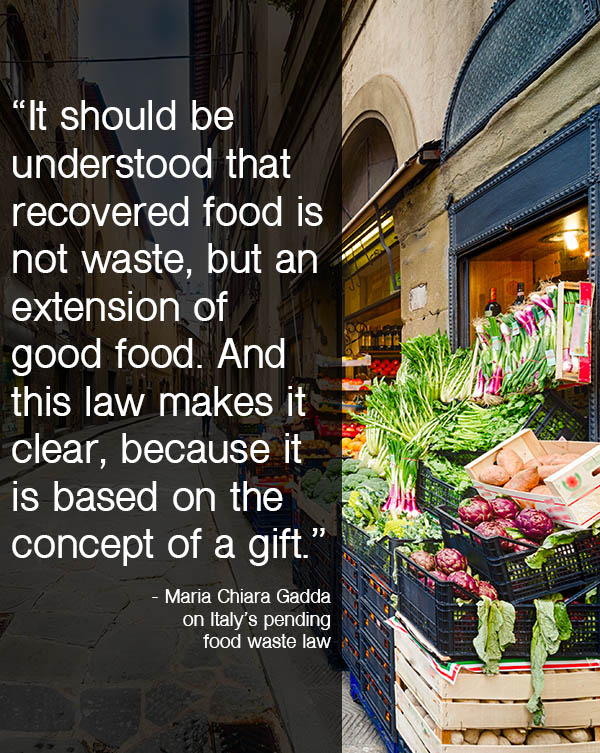 Italy is following France’s lead and reducing its food waste footprint. The new Italy food waste law is currently under discussion in the Senate and expected to pass this week.

Last year, France pledged to cut food waste in half, partly by requiring supermarkets to give spoiled food to the needy, rather than throwing it away. The law requires large grocery stores to set up donation deals with charities, so there will be a dedicated channel for all of their unsold food that’s still safe to eat.

The Italy food waste law has gotten overwhelming support from both parties and is expected to pass. If it does, it will be the second EU law governing food waste. What makes the Italian version of this law different is that it’s a reward system, not a punitive one. In France, stores face hefty fines for throwing away unsold food. In Italy, participating stores and restaurants will receive large tax breaks. They’re treating that unsold food as a valuable gift.

In an interview with La Repubblica, Democratic Party member Maria Chiara Gadda, who introduced the bill to the House said, “Punishing those who waste is of little value. It should be understood that recovered food is not waste, but an extension of good food. And this law makes it clear, because it is based on the concept of a gift. ”

On her own site, Gadda had more to say about the House passing the Italy food waste law, which passed with no votes against and 106 abstentions:

“At the end of this day full of emotions, I want to share a single word … THANK YOU! Thanks to those who supported this bill from the beginning to reduce waste and encourage donations, even when the issue was not so popular. Thanks to all those who have worked, studied, shared experiences, in order to make an idea … a concrete and effective tool.  The baton passes to the Senate, but for me this is the day of joy, and so much emotion. No votes against, ahead now!”

Agricultural Minister Maurizio Martina told RT: “We are making it more convenient for companies to donate than to waste.” The law’s goal is to recover a billion tons of food waste in 2016. That’s twice the amount that Italy recovered in 2015.