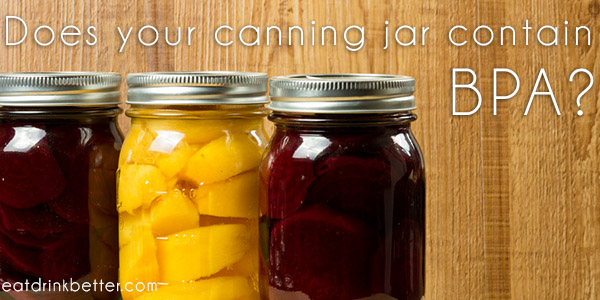 We know that you can get exposed BPA from cans, plastic bottles, and even receipts, but did you know that the lids on conventional glass canning jars also contain BPA?

I know, it can feel like even when you’re going out of your way to do the healthy, ethical thing you can’t win. If you take the time and energy to preserve your own food, you’d think you’d be safe from endocrine disruptors like BPA. That many canning jars contain BPA is the bad news. The good news is, there are BPA-free options out there!

Ball recently stopped using BPA in their canning lids, and you might just have some in your stash already! A savvy reader at Diary of a Tomato had this to say:

“They began production/release of their BPA-free lids in January 2013. To identify a BPA-free box (they are not marking it on their boxes, according to the company spokesman), look for a production code printed/stamped on each box that is One Letter Followed by 10-11 Numbers. On Ball boxes, you’ll find the code next to the flag on the bottom of the box. On Kerr boxes, you’ll find the code on the back of the box, above the text. It won’t be a particular code, but only BPA-free boxes will have these (or any) codes like this stamped on them.”

What’s crazy is that Ball hasn’t really marketed their new BPA-free lids, so many people don’t know that they’re available.

Ball isn’t the only BPA-free canning jar out there, though. Weck canning jars have always been BPA free, and what’s cool about Weck jars is that you can reuse them over and over. Typical canning lids are one and done.

Do you preserve your own food? Know about other BPA-free canning options? Let’s keep the list going in the comments!