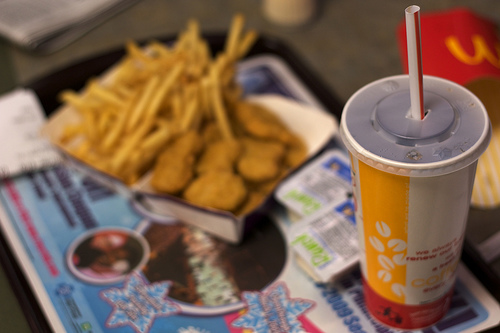 High fructose corn syrup is a hot topic these days. Whether we’re talking about the corn lobby’s attempt to give it a new name or that more and more products are ditching the HFCS in favor of table sugar, it’s definitely on folks’ minds.

Both pro- and anti-HFCS have a lot to say about the sweetener, and part of me worries that this debate is an unintentional red herring. Let’s set aside the more hotly-debated concerns about HFCS for a minute and look at some of the over-arching issues with food.

America is becoming an obese nation, and HFCS is a piece of that puzzle.

I fully agree that, thanks to subsidies, HFCS is a cheap food additive. Sugar is an excellent preservative, so adding HFCS helps lengthen products’ shelf lives. These are serious benefits for food manufacturers, and it’s no wonder that this stuff is in everything. It’s contributing to the sweetening of our diets, adding empty calories to so many foods that we eat.

The problem is, HFCS isn’t the only culprit. Table sugar, processed foods, and white flour all contribute to obesity, too.

We eat too many empty calories, we are too sedentary, and we need to take a hard look at our overall lifestyles. When we get bogged down in arguing about one factor, we’re wasting energy that we could be spending on educating people about proper nutrition.

Jeannie talked not too long ago about making your drinks count, and the same goes for food. Filling up on sugars, white flour, and processed foods is bad for our health.

We know that Americans come up far short when it comes to fruit and vegetable consumption. Obesity, heart disease, and diabetes are on the rise, and we have our diets and sedentary lifestyles to thank.

Rather than arguing about one aspect of the problem, what if we spent that time, energy, and money on educating people about eating balanced diets and getting proper amounts of exercise?

You might be able to argue that soda made with sugar is slightly better for you than soda containing HFCS, but whether that’s true or not, it’s just a tiny part of the problem. The big problem is how many of those sodas we’re drinking every day, as well as the high fat, low fiber, nutritionally void meals that accompany those sodapops.

If we’re going to fight obesity-related illness, we need to stop arguing semantics and start talking about what a healthy lifestyle really looks like.

What do you guys think? Is the HFCS debate distracting us from the bigger issues at hand? Is it the key to this country’s obesity epidemic? Is it somewhere in between? I’m interested in your thoughts on this!