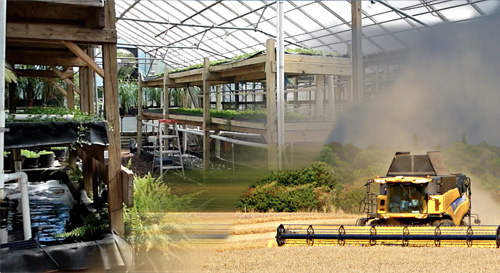 Myth #3: Organic Farming Is Better For The Environment

“As an ecologist by training, this myth bothers me the most of all three. People seem to believe they’re doing the world a favor by eating organic. The simple fact is that they’re not – at least the issue is not that cut and dry.”

Are they not, or is the issue not cut and dry? Perhaps the author should step back to basic logic before they move on to ecology, writing sentences that self-contradict is only good writing if you intention is to confuse and deceive.

Good thing we aren’t required to buy our organic food from factory organic farms, cause that would be quite a shame. This sentence is a textbook straw man argument.

“Take, for example, organic farming’s adamant stance against genetically modified organisms (GMOs). GMOs have the potential to up crop yields, increase nutritious value, and generally improve farming practices while reducing synthetic chemical use – which is exactly what organic farming seeks to do.”

Indeed, genetic modification technology does have the potential to up crop yields, and increase nutritional value, but can the author point to a single instance in which such a modified organism has made it to market?

I was aware of two good projects that were working on improving the nutritional value of rice and cassava, but both have had their funding either cut or constantly jeopardized. You know what does get to market? Stuff that makes a lot of money, like herbicide resistant plants that encourage farmers to dump far too much herbicide (which the same company, coincidentally, sells) on their fields. This practice has resulted in the emergence of herbicide resistant superweeds that are likely to destroy any benefits that the resistant crops provided in the first place as time passes. And you know one major benefit of spraying BT toxin on plants rather than engineering it into the plant itself? You can wash off the toxin in the first case, but not in the latter one. And, evidently BT doesn’t get destroyed in the mammalian gut like we were all told, soothingly, by the GMO producers. A study at the University of Sherbrooke Hospital Centre in Quebec found that 93% of infants in the study had BT in their blood!

I am perfectly willing to accept making exceptions in the organic standard for modified plants that actually do improve nutrition, or allow the use of marginal soils. But if we were to do so today, we would have to write exceptions for exactly zero GMO plants.

This study which the author cites as proof of this statement dates from 2002, which is practically ancient in terms of the pace of modern crop science. More recent studies do not support the contention that more land would have to be used under novel management systems than under conventional agriculture. In some cases, organic methods have been shown to have significantly higher yields than conventional methods.

Hiding behind starving people is a common refuge for proponents of conventional agriculture, but those people are starving under a system which is dominated by conventional agriculture. If we spread simple, low cost and locally appropriate organic methods to the people who are starving, instead of expecting them to take out a loan for a tractor, some GM seed and a load of herbicide, perhaps they wouldn’t be starving in the first place.

This section serves as the conclusion, so it also serves up all of the previous mischaracterizations, misrepresentations and lies for another dose in summary. But there are a few, in particular, that I want to address.

“Organic farming does have many potential upsides, and may indeed be the better way to go in the long run, but it really depends on technology and what we discover and learn in the future. Until organic farming can produce crops on par in terms of volume with conventional methods, it cannot be considered a viable option for the majority of the world. Nutritionally speaking, organic food is more like a brand name or luxury item. It’s great if you can afford the higher price and want to have it, but it’s not a panacea. You would improve your nutritional intake far more by eating a larger volume of fruits and vegetables than by eating organic ones instead of conventionally produced ones. “

-There are links to studies that demonstrate that earlier in this piece, but I want to stress that the people in that situation are the ones that suffer the most food insecurity, and thus organic techniques can help the people who need it the most in a way that conventional farming techniques cannot. And trust me, to a farmer who is looking at having to take out a loan to buy what is needed in conventional agriculture, and in the process loses the option of saving seed from year to year, conventional farming is what seems like a luxury. The knowledge and skills that are needed for an organic farm to work can be much more cheaply distributed than the machines and chemicals that are required for conventional monoculture.

“What bothers me most, however, is that both sides of the organic debate spend millions in press and advertising to attack each other instead of looking for a resolution. Organic supporters tend to vilify new technologies, while conventional supporters insist that chemicals and massive production monocultures are the only way to go. This simply strikes me as absurd. Synthetic doesn’t necessarily mean bad for the environment… New technology isn’t the enemy of organic farming; it should be its strongest ally.”

This statement a broad mischaracterization of the argument for organic agriculture.

Organic farming supporters do not tend to vilify new technologies; many of them are at the forefront in adopting new techniques, like the use of worms to produce vermicompost, and the use of combined aquaculture/hydroponic systems.  Many organic farmers see these technologies as a great ally in their fight to feed the people. The author seems angry that they refuse to adopt her favored technologies, but why should they if many of them (like GMO’s) have failed to deliver on many of their promises? They are just selective in their adoption of new technologies, which is entirely different from hostility towards progress.

Synthetic might not necessarily mean bad, and indeed I can’t think of a single organic farm that I have visited that doesn’t use synthetic materials like modern plastics in their operations. But synthetic chemicals are difficult if not impossible to comprehensively test in a natural environment, as the example of the vast environmental effects of Bisphenol A has amply demonstrated. GMO’s are similarly difficult to test, so the organic standard has thus far excluded them. But that’s the thing, it’s not really the proponents of organic that have this all or nothing mentality. I, for one, know for certain that the use of certain synthetic fungicides will be a necessity for the foreseeable future in the production of a number of fruits that would rot on the tree without them.

Really, if you want to look for the party that wants to destroy the other one, the real culprits are those that make the big money off of conventional agriculture. The constant suing of farmers that don’t use GMO seeds is one example, as is the way that certain agricultural giants have been trying to stamp out seed cleaning operations for years now, in an effort to capture the market for seeds entirely.

“As far as I’m concerned, the biggest myth when it comes to organic farming is that you have to choose sides. Guess what? You don’t. You can appreciate the upsides of rotating crops and how GMOs might improve output and nutrition. You, the wise and intelligent consumer, don’t have to buy into either side’s propaganda and polarize to one end or another. You can, instead, be somewhere along the spectrum, and encourage both ends to listen up and work together to improve our global food resources and act sustainably.”

Finally, some truth in this article. The fact is that you don’t have to choose sides, but the author certainly seems to have, since this article is nothing short of a flagrant hit piece.

Let me make this clear: I have been at a project in Milwaukee that produces more food per square foot than anything conventional agriculture could ever dream of, and does it with entirely organic methods. You might have heard of them, they’re called Growing Power and they are awesome, producing enough food for 10000 plus people in just a few acres. Feeding the world without industrial, petrochemical farming is very much possible, and it’s time to stop pointing at bad actors that take advantage of the sloppiness of the organic certification to argue for sticking with the old system.

Speaking of that sloppiness, Growing Power themselves can’t get organic certification, because they are in a city and they can’t prove that there was never any oil spilled on their property. But the techniques are sound, and they should be widely adopted.

Crossposted on The Trip for Life