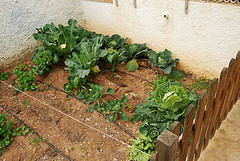 When Michelle Obama helped break ground on the White House organic garden, I’m sure she understood that the benefits went far beyond the borders of the veggie patch.  It may help create green collar, shovel-ready jobs.  Low-income kids from local schools get an incredible opportunity they will never forget:  playing in a vegetable garden and learning where our food comes from, at the White House, while they grow food that may well be eaten by our President or the President of Costa Rica or South Africa.  The garden also provided other intangibles that America needs right now:  hope, independence, and a can-do attitude.  Michelle’s approval rating stands at 84%, and most articles talking about why she’s so popular will mention the garden.

But I have to wonder…did she guess that she’d be saving the taxpayers money by reducing the grocery bills at the White House?   A recent Wall Street Journal article touted the savings in backyard gardens:  investments as small as a dollar can produce $75 worth of veggies, and the average family with a garden saves about $530 per year on groceries.

Intrigued, I decided to investigate my own cost/benefit analysis in my small organic garden in San Francisco.

I’m lucky to have garden space.  Many in San Francisco don’t, and must rely on community gardens if they want to grow things.  But as outdoor space in the city goes, my garden is fairly typical:  small and shared with several neighbors.  The garden itself is about 150 square feet all told.  I have to pass everything by my neighbors who co-own the backyard with me.

That said, it still works, as there are many benefits to a garden like mine.  California in general and San Francisco in particular have spectacular weather for growing things, and the soil is quite fertile.  As an added bonus, I live on the sunny side of the city, in the beautiful Mission district.  The number of organic gardening resources here, such as garden stores specializing in organics, as well as neighbors who have been gardening without chemicals for 30 years, as you might expect for the greenest city in America, is quite high.  And thankfully, my neighbors love organic produce, and have entrusted me to produce a bunch of it.  We split costs, and we split the produce, while I do the work.

To begin, I needed some compost, a shovel and some plants and seeds.  I started modestly, with a couple of plants, an inexpensive drip irrigation system, and some soil amendments. I had a little experience, but mainly just asked the gardeners at the local garden store for their advice, which proved quite prophetic.

The kiwi vines (male and female) immediately took off, as did the Russian Kale, spinach, two types of lettuce, kumquat, rosemary and chocolate mint.  The peas died because I put them in a place that didn’t get enough sun.  The cabbage was chomped by dreaded garden snails.  The cilantro died a mysterious death and was unrecoverable.  But, there was enough success for me to be encouraged, and my neighbors were happy enough that they committed more funds to the cause.  So, I bought a couple of fruit trees, more compost, and a few more seeds and plants.  Now, tomatoes are thriving, strawberries are spreading out, squash is taking over (as it does), and the spinach has become a bush the size of Stephen Colbert’s fake ego.

All told, I probably spent $300 (split 3 ways, so I personally only spent about $100), and a couple of Saturdays plus an hour here and there for weeding and other maintenance, and now my garden is thriving and abundant with food.  Just this morning, I made a spinach and Russian Kale omelette.  Last night, I had kumquats in my adult beverage, and complemented my potato burrito with fresh rosemary and a salad consisting of about half garden and half non-garden ingredients.  I eat a lot of salads.  We all do, and the spinach, kale, and lettuce still continues to out-produce our needs.  I frequently bring produce to my friends whenever I go visit.

In two years, my garden should be producing a bounty of low-maintenance fruit.  I planted fuji apples, Santa Rosa plums, meyer lemons, kiwi, apricots, pears, and peaches.  These were all ultra-dwarf varietals (except for the kiwi, which are vines), meaning that none of the trees will exceed 8 feet in height…good for keeping neighbors happy in tight quarters like ours.  And none of them did I have any particular knowledge of before going down to my local garden center.  I simply asked what fruit would thrive in my neighborhood, and heeded the advice of the salespeople.

I fully expect a Return on Investment for my organic garden in the thousands of percent range, year after year, for many years to come.  My Return on Happiness has already exceeded my wildest expectations, and I have numerous friends who are following my lead with container gardens, window boxes, or small plots of their own.  Perhaps my favorite outcome so far is that my neighbor’s 4-year-old son loudly exclaims how much he loves peaches every time I see him.  He’s shown a natural curiousity about the things growing in our garden that gives me tremendous hope for our future.  Or perhaps the best outcome is that my diet has gotten more varied and substantially weirder.  While Russian Kale frequently makes its way into my breakfast, I also found myself weeding my garden with one hand and grazing on spinach leaves with the other.

I would estimate that 5-10% of what I eat comes from my garden now.  I expect that number to grow, but at the very least, I can say confidently that I’ve saved more than the hundred dollars I put into the place, just from salad greens alone.

Scott Cooney is the author of Build a Green Small Business:  Profitable Ways to Become an Ecopreneur (McGraw-Hill), and doesn’t think having Russian Kale for breakfast is weird at all.