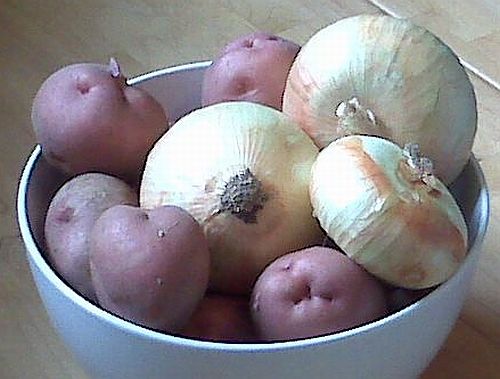 [social_buttons] Is it really possible to eat locally? Three of the most common criticisms I see of eating locally are that it can only be done in areas of high agricultural concentration, like California, only in the summer when produce is abundant, and that nutrition will suffer for eating only local food. Well, in the first week of April, a teenager in Minnesota decided to try eating locally and blogged about it. This time of year is still quite cold in Minnesota and most fruits and vegetables haven’t started producing. Could she eat a nutritious diet in Minnesota in winter?

Nicole defined eating local as her own state and the four surrounding it. After some research, she identified local providers of meat and dairy, some honey, pasta, granola and other things, and suppliers of twelve vegetables.

The first few days were difficult, she wrote, as she got used to cooking most of her own meals – few convenience foods are locally grown and packaged – and planning ahead. I think most of us can sympathize there. Cooking from scratch takes time. Stuff is always coming up at the last minute and we have to change our plans. Later, as she grew used to the challenges, she said it got easier.

Nutrition on a Local Diet

One thing she mentioned was that she felt she was lacking in vitamins on her local diet, particularly vitamin C. However, of the twelve vegetables she listed, parsnips, spinach, potatoes, rutabagas, turnips, and tomatoes have good amounts of vitamin C. If the beets and turnips she listed came with the greens still attached, then there’s even more vitamin C. Any combination of two cups of those vegetables would give a person a full day’s vitamin C, quite a bit of vitamin A, and several minerals.

She followed up on her local eating with a week of eating only foods purchased from Target. She said it was good to be eating fruit again, but that much of the food tasted odd after a week of locally-grown foods. The Lunchables tasted greasy; the bread tasted sweet and fluffy.

Nicole also summarized her findings for us. Her biggest complaints about eating locally were: time spent preparing the food, cost, and difficulty in sourcing the food. Her favorite things: eating fresh food, helping the local economy, and helping the environment. In the future, she says she plans to eat a mix of local and not-so-local.

My own experience has been similar to hers, although not exactly. In Texas, local food is easy to come by. Agriculture is one of the state’s main industries. Finding purely local sources took a bit of research at first, but now that I know where several sources are, the amount of time I spend shopping local is the same as the amount of time I used to spend just stopping by Target. (I still do shop at Target sometimes, but our local Target labels local food.) It helps that the state of Texas has its own “buy local” initiative called goTexan.

Her experience with the price of local food is the opposite of mine. It’s cheaper here to buy local produce than to buy produce shipped in from further away. Texas beef is conventionally-raised, grass-fed with no unnecessary interventions, and organically-raised, with the price differences inherent in the production methods. When local suppliers have a dependable market, the cost goes down, so perhaps that will change in Minnesota over time.

How have your experiences with buying local been? What sort of obstacles have you found and how did you overcome them?