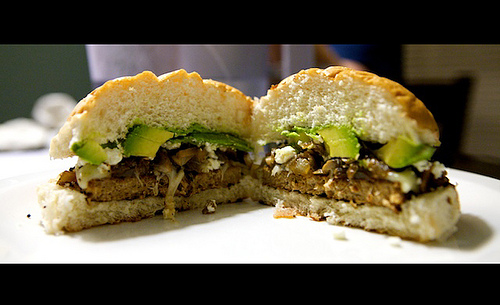 Do your burgers contain toxic hexane? If you eat non-organic soy burgers, the chances are good that they do. Take a look at the list below to find out.

Do you love veggie burgers? At different points in time, I have been a huge fan of a few brands of veggie burgers (and at times, they have been completely unappealing to me… don’t ask me why, I don’t know). Well, now, whether you love them or not, or are moody about them like me, you might think twice before buying them.

A new investigation by the Cornucopia Institute has found that most major brands of veggie burgers contain trace amounts of hexane, which is listed as a “hazardous air pollutant” by the EPA. Hexane is shown to cause nervous system failure and skin disorders in humans.

The Cornucopia Institute’s report informs us that although “organic” food processing prohibits hexane, hexane is common in “natural” products, including those products labeled “made with organic ingredients” that may contain some organic ingredients but also contain a good percentage of non-organic ones.

“In order to meet the demands of health-conscious consumers, manufacturers of soy-based fake meat like to make their products have as little fat as possible. The cheapest way to do this is by submerging soybeans in a bath of hexane to separate the oil from the protein,” Kiera Butler of Mother Jones Online reports.

“If a non-organic product contains a soy protein isolate, soy protein concentrate, or texturized vegetable protein, you can be pretty sure it was made using soy beans that were made with hexane,” Cornucopia Institute senior researcher Charlotte Vallaeys says.

A list of burgers that you should probably avoid until this issue is addressed is below. But, perhaps more important than that for you, “Nearly every major ingredient in conventional soy-based infant formula is hexane extracted,” according to the report.

Products Made with Hexane

Amy’s Kitchen (The CEO/co-founder of Amy’s is somewhat of a friend — a friend of several friends of mine — and I don’t think that he would be using hexane if he knew it had negative human health consequences. If possible, I will get in touch with him and see what additional info I can find out. *UPDATE WITH RESPONSE FROM AMY’S CEO & CO-FOUNDER IN THE COMMENTS BELOW)
Boca Burger, conventional
Franklin Farms
Garden Burger
It’s All Good Lightlife
Morningstar Farms
President’s Choice
Taste Above
Trader Joe’s
Yves Veggie Cuisine

Whole Foods brands and Silk soymilk were not tested.

Also, as a final note, my FAVORITE burger of all time (non-homemade, that is) is the Sunshine Burger. Rather than try to imitate meat or other burgers, it is a truly wholesome and delicious burger with its own unique taste. It is based on raw sunflower seeds (no soy or wheat in it) and uses other whole grains and vegetables in it. It contains no funky ingredients — pure and simple ingredients only. I suggest trying it out next time you have the chance.

By the way, I have no affiliation to the makers of Sunshine Burgers. I just love them.