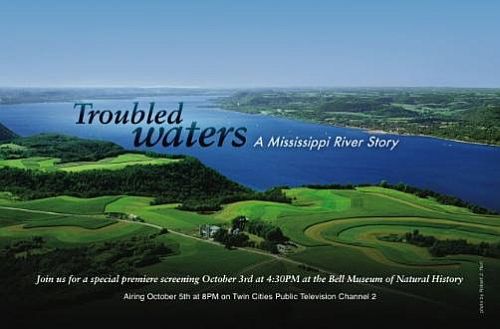 A kerfuffle at the University of Minnesota has turned into quite the brouhaha. A little documentary film called “Troubled Waters: A Mississippi River Story” was set to be released on Oct 3 at the University of Minnesota’s Bell Museum of Natural History and then shown on TPT (a local PBS station) on Oct 5. The film was pulled by Karen Himle, vice president of public relations at the U of M with only a vague explanation.

What’s in “Troubled Waters” That is So Shocking?

According to people who have seen the film, “Troubled Waters” examines the contribution of agricultural runoff and other sources of water pollution to the dead zone in the Gulf of Mexico. It also shows methods that farmers, scientists, and other citizens use to reduce the pollutants that get carried to the Mississippi River and on into the Gulf of Mexico.

A statement on the Bell Museum’s web site indicates the documentary was to be about “the waters of Minnesota, designed to promote watershed understanding and citizen action in protecting, restoring and conserving water resources.” It seems there’s no conflict between what the film is and what it was meant to be.

The film cost $500,000 in grants and state lottery proceeds to make over two years, with $349,000 coming from the Legislative Citizen Commission on Minnesota Resources (LCCMR) through the Minnesota Environment and Natural Resources Trust Fund, $130,000 from the McKnight Foundation, and another $25,000 from the Mississippi River Fund. Representatives from those three groups have stated that they don’t know why the release of “Troubled Waters” has been postponed and they are waiting for word from the University of Minnesota.

Who Made the Decision to Postpone “Troubled Waters”?

There’s a lot of finger-pointing of the “somebody else made the decision, so don’t ask me” variety. University News Service director Daniel Wolter said the Bell Museum director and the producer of the film made the decision, but producer and director Larkin McPhee responded that she never delayed the release. McPhee and assistant producer Shanai Matteson, community program specialist at the Bell Museum, indicated that they fact-checked everything with at least three independent sources.

Karen Himle, the VP of PR mentioned above, told Minnesota Public Radio that she and Al Levine, Dean of the University of Minnesota College of Food, Agricultural and Natural Resource Sciences (of which the Bell Museum is a part) had discussed the film and agreed to postpone its release until further scientific review. But Dean Levine says he had nothing to do with the postponement.

However, Dean Levine had some interesting comments to say about “Troubled Waters”. According to the MPR article, he said the film “vilifies agriculture” and that the film isn’t inaccurate, but it’s unbalanced.

McPhee contends that the film is balanced and tackles a very complicated subject.

Dr. Susan Weller of the Bell Museum originally claimed she did not make the decision, but has now sent out a press release indicating that it was entirely her decision.  Perhaps it was, but why are these other people saying that everyone else made the decision?

A Conflict of Interest

Himle, as was pointed out in Molly Priesmeyer’s original investigative piece on this story, has a serious conflict of interest. Her husband, John Himle, is CEO of Himle Horner, a public relations firm whose clients include many with ties to industrial agriculture. John Himle has stated that he had nothing to do with the decision to set the film aside and that no one from outside the university had approached him or applied pressure.

Karen Himle is no longer available for interviews, an interesting move for a public relations person.

“Troubled Waters” has been reviewed by close to a dozen scientists and university officials involved with the University of Minnesota and other universities. According to Dr. Susan J. Weller, Director of the Bell Museum of Natural History, concerns raised by that initial viewing group were behind the decision to pull the film. A smaller group of “qualified faculty” will review the film and make recommendations.

Why aren’t the faculty members who previously viewed the film qualified? That’s only one of the questions left unanswered.

“Troubled Waters” clearly has information that would be of interest to all of us. It’s important to understand the effects of our actions on fresh water supplies. Fish and seafood from the Gulf provide a significant source of protein for the communities along the shores and a good ways inland.

Farmers are always interested in more and better ways to reduce the runoff from their land. Fertilizer costs money. If a significant proportion of the applications just wash away, the farmer may as well have burned that money.

Let the University of Minnesota know what you think of their indefinite shelving of “Troubled Water: A Mississippi River Story”.

Brian Devore’s post on it.  (He’s seen an unfinished version of “Troubled Waters”.)

Bell Museum’s official statement on the front page of their site.  You may need to scroll.

Star-Tribune.  The article is three pages long.  I encourage you to click through.  It’s all very informative.