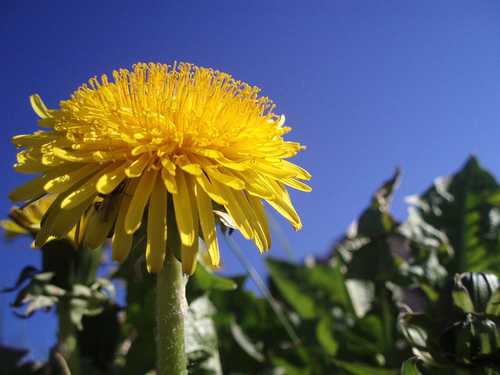 After many years of studying invasive plant species in Patagonia, Argentina, Dr. Eduardo Rapoport, Professor at the Universidad Nacional Del Camohue, realized that many of the “pests” he was cataloging were edible. “I found that, especially in areas disturbed by man, such as roads, back lots, and gardens, there are a great deal of unintentional food sources.” As a result, Dr. Rapoport found himself looking at these “pests, invaders, and weeds,” in a very different light.

“I gathered together a group of students and we set out to assess how many kilograms of wild-growing edible food could be found in a hectare of urban space,” said Dr. Rapoport. Starting with the airport and working through different parts of the city, Dr. Rapoport and his students found that the average amount of food per hectare was 1,300 kilograms—or about 3,400 pounds of food per acre.

Dr. Rapoport repeated the same study in Mexico in order to compare the results in temperate Patagonia with a tropical environment. He and his students found that there was an even greater wealth of food in that area—about 2,100 kilograms per hectare. “It was surprising,” said Dr. Rapoport, “and it was incredibly valuable. There are people who are going hungry and they are surrounded by plenty of food. They just don’t know it.”

Not only are there a wide variety of wild edible plants growing near city streets, at schools, and in the public areas throughout South America, explains Dr. Rapoport, but many of them are also incredibly productive. “These are weeds,” says Dr. Rapoport, “they multiply and grow quickly. We found that many of them could be harvested multiple times per season, meaning that a gatherer could get more than one meal from one plant over the course of a very short period of time.”

Dr. Rapoport and his wife, Dr. Barbara Drausal, with the help of the University, have published a book, Malezas Comestibles del Cono Sur or Edible Weeds of the Southern Continent, a guidebook of sorts that identifies and describes 240 edible weeds growing throughout South America. The book includes illustrations and recipes, directing the reader to the parts of each plant that are edible and providing detailed instructions for how to best prepare them.

Although, Dr. Rapoport does not encourage people to plant these species—they are invasive after all—he says that they can be an important source of inexpensive food. “This is not a solution to world hunger,” says Dr. Rapoport, “but it is valuable knowledge that has been lost over the years. There is food all around us but most people just don’t notice it. Or they destroy it because they mistake it for useless pests.”

In addition to his book, Dr. Rapoport visits primary school classrooms to help educate the next generation of Argentina’s food gatherers. And he has reached out to the Ministry of Education in the hopes that his research might become a part of standardized curriculum. “Often I take students outside to their school yard,” he says, “and they are amazed by how many edible plants are growing right there.”

With edible plants throughout South America originating from North America, Asia, Africa and Europe, Dr. Rapoport also hope to have his book translated into English and other languages. The more people he can share this information with the better. “It’s about getting this valuable information to the people who need it most,” he says, “the hungry people who are surrounded by food.”

To read more about looking to “weeds” and indigenous vegetables as a source of food, see: Keeping Weeds for Nutrition and Taste, Homegrown Solutions to Hunger and Poverty, Emphasizing Malawi’s Indigenous Vegetables as Crops, and Malawi’s Real Miracle.