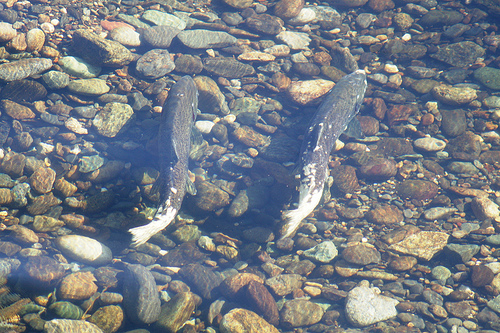 The virus can be spread in the water, from fish to fish, and by employees of the fish farm and through equipment, such as nets. Crowded conditions cause it to move through a fish population quickly.

In the wild, a sick fish will usually be picked off by a predator, slowing the spread of a disease. But in the crowded conditions of a fish farm, a dying fish will remain in close contact with other fish as it dies and sloughs off the virus into the water.

That the virus has been found in a wild population is worrisome. It might be a fluke – only two fish out of 48 tested has the virus. It may also mean that the virus can survive longer in open water.

Several vaccines exist to prevent infection with the virus, but researchers say they are not entirely effective and are impractical to administer. That’s within a fish farm, where the fish are close together and penned in. In the wild, it would be nearly impossible. This has serious implications for wild salmon fisheries.