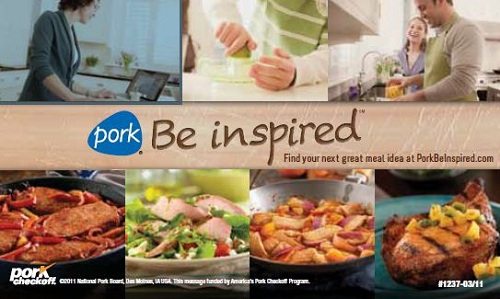 Industrial pork is getting a face-lift.

On Friday, The National Pork Board ditched the decades-old slogan “The Other White Meat” and replaced it with a new message: “Pork: Be Inspired.”

USDA data shows pork consumption lagging behind beef and chicken. The Pork Board hopes that the new ad campaign will increase pork sales by encouraging existing consumers to to eat more of it.

According to Pork Board research, about 70 percent of the nation’s at-home consumption of fresh pork can be attributed to just 28 percent of U.S. households. The new slogan aims to create a stronger, more emotional connection between these consumers and their favorite meat.

Tom Laskawy at Grist had a few choice words on the new slogan:

Sure, it beats “Pork: When You Can’t Afford a Steak”; or “Pork: We’re Pretty Sure It Won’t Give You Swine Flu”; or even “Pork: Wash Hands Thoroughly After Handling.” But perhaps that isn’t saying much.

Joking aside, the new ad campaign is a good reminder of the USDA’s role in the marketing of unhealthy food.

The Pork Board is one of several USDA-managed check-off programs responsible for marketing agricultural products such as pork, milk, cheese, and beef.

And now the pork check-off program is getting a new ad campaign to hype what’s arguably the most environmentally destructive and disease-prone industrial meats out there.

I have a hard time understanding why the USDA – the same agency charged with regulating the damage caused by factory hog farms – also oversees the effort to sell more pork. I’d certainly “be inspired” if the USDA spent more time cleaning up CAFOs and less time trying to get us to eat more industrial meat.